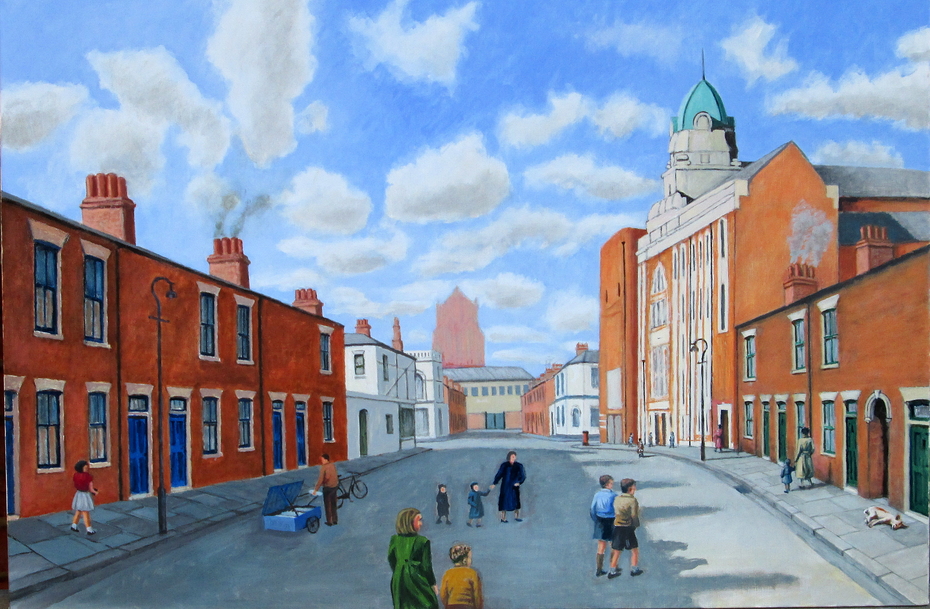 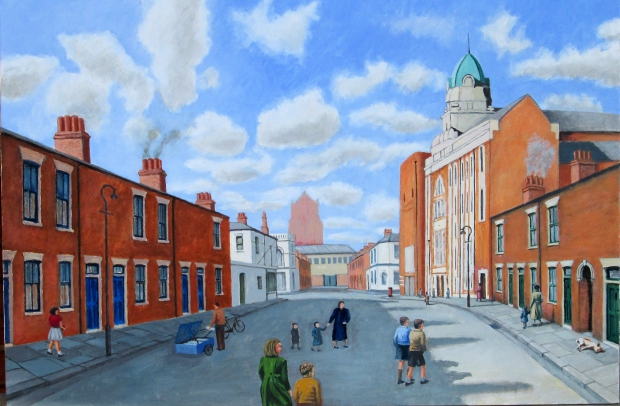 2014
This painting depicts mostly children walking towards the Central Methodist Hall, a grand imposing building with a copper dome in Duncombe St, Grimsby to attend a Sunday morning school. The Hall dominated the working class houses nearby. It was designed by the architect Arthur Brocklehurst of Manchester and was built during 1934-36. It remained a religious building until the 1980s. It is now a concert venue and community centre run by a charitable trust. My sister Christine and I were sent to this school for a time in the late 1940s but we soon declared that we did not enjoy it and ceased going. Since our parents were not very religious, they did not insist that we return. Also in the street is a young man with a cart and bicycle delivering Sunday newspapers. Beyond the Hall is a tall red brick building that was a cinema called The Regal (1937-2004). Its frontage was located on Freeman St. We often queued in the street outside waiting to gain entrance because the cinema was very crowded during the 1940s and 1950s. It is now closed. Opposite the cinema was a public house called The Freeman Arms that was popular with fishermen and notorious for fighting and prositution. The pub still exists. Duncombe St was named after William Duncombe a Grimsby Member of Parliament during the 1820s.
My paternal grandmother Lily Walker, a widower, lived at 79 Duncombe St on the right of the painting. Before the cinema was built a theatre called The Prince of Wales occupied the site. Lily used to provide lodging for actors and actresses from the theatre in order to earn extra cash. In this row of houses can be seen the entrance to a passageway that gave access to a shabby courtyard and more terrace houses. An indication of how crowded together the people were. The courtyard was served by a single water tap located in the middle. The red brick terraces in the painting have now all been demolished. On the horizon beyond Freeman St and Railway St is a red brick flour mill - Victoria Flour Mill - then called Spillers dating from 1889. It still exists but no longer functions as a mill. 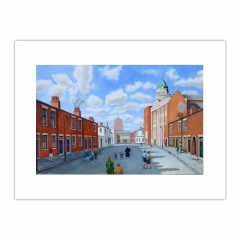