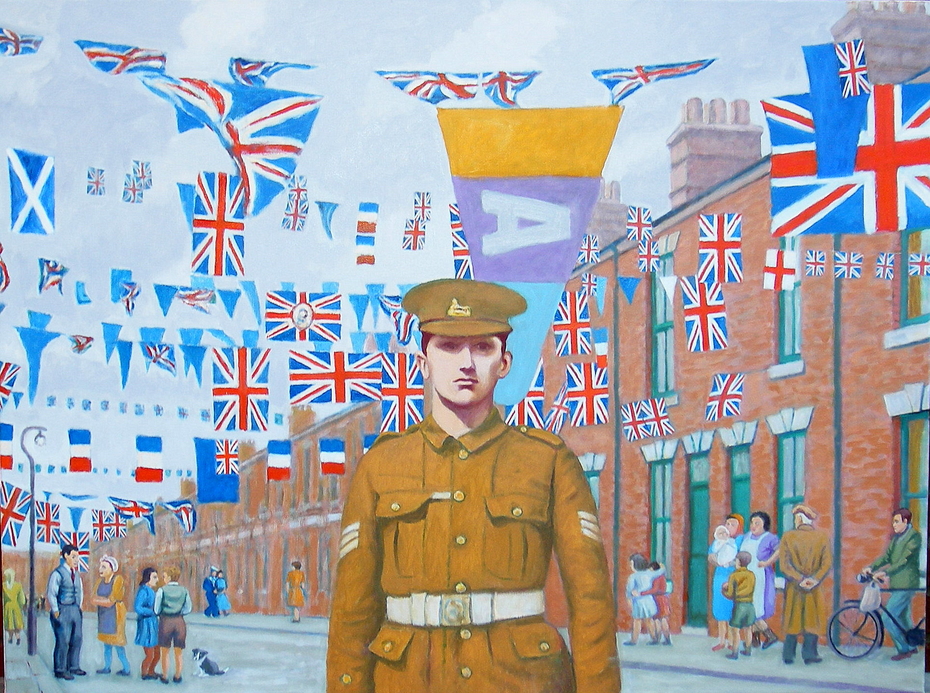 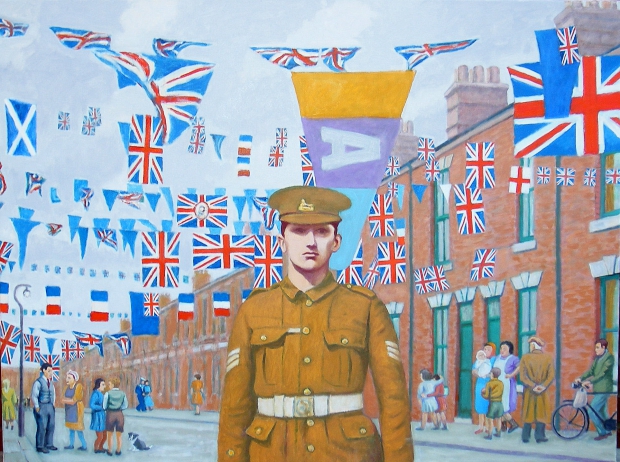 2012
The central figure in this painting is my paternal grandfather Sergeant Albert Victor Walker (b. 1886 Caistor) who served in the 1/5th Territorial Battalion of the Lincolnshire regiment during WW1. (His number was one.) In civilian life Albert worked as an iron turner lathe, marine engineer. He was killed by the Hun on 13th October 1915 aged 30 in an attack on the Hohenzollern Redoubt near Loos. Virtually the whole battalion and all but one of its officers were wiped out. His body, like 97 per cent of his dead comrades, was never found. Albert left a wife and four children and an estate worth £55. They lived at 80 Duncombe St, Grimsby. Family legend has it that Albert left for the front without a fond farewell from his wife Lily because she had asked him not to go (it seems he could have remained behind to train new recruits). He was a man I never met but I have often wondered what he was like and whether or not he had any misgivings about the war. There is a physical connection between us because I inherited some of his genes. My father served in the British army in WW2 - I remember handling his cap badge - the Sphinx in Egypt (a motif derived from a campaign against Napoleon involving the Lincolnshires in 1801) and, fortunately, he survived.

Behind Albert is a view of Hope Street, Grimsby at the time of the VE celebrations in 1945. Hope Street was not far from Albert’s home and its inhabitants were equally patriotic. Although it was one of the poorest streets in the town, it always had the biggest display of flags, bunting and other decorations. I spent the first ten years of my life in such a red brick, terrace house without a front garden (in Newmarket St) and no indoor lavatory or bath, and soon my ambition was to escape from this restricted, working class background. However, I cannot think of such streets without nostalgia and a mix of emotions because although I wanted to leave them, they were my home and my future wife Margaret also grew up in a similar environment in Newcastle upon Tyne. Mostly, these streets were knocked down and ‘redeveloped’ in the 1960s and 1970s. 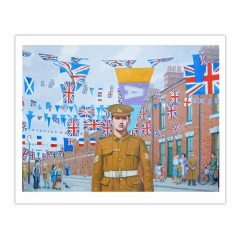