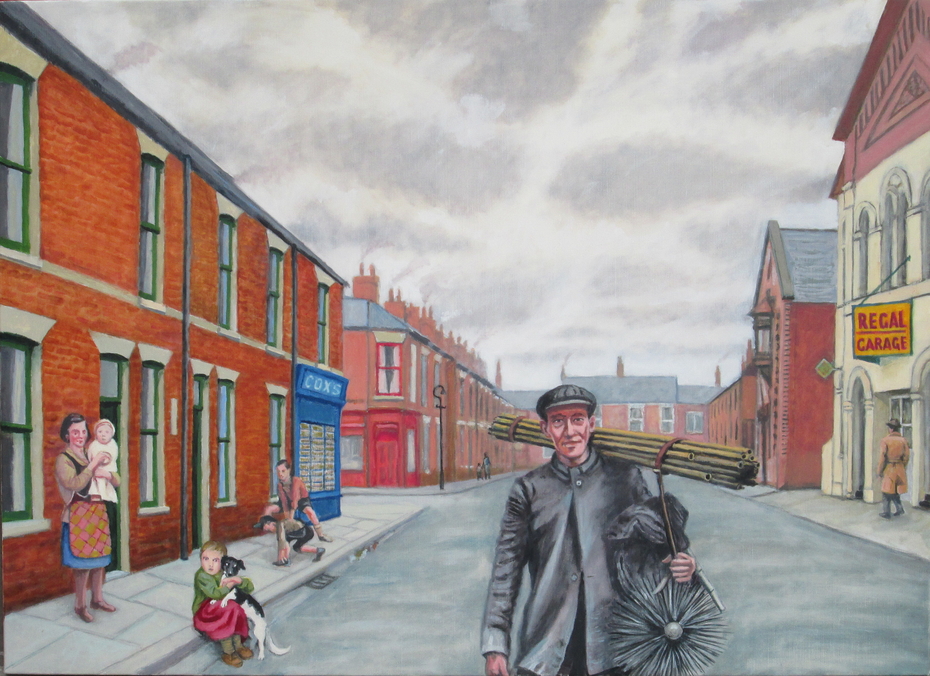 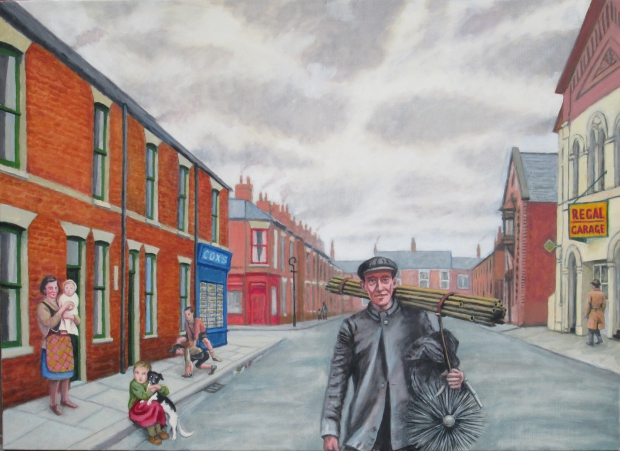 For centuries British homes were heated by coal fires which naturally generated much soot. It accumulated inside chimneys and if they were not cleaned regularly they would catch fire. Hence the need for chimney sweeps who were familiar figures in working class areas until the mid-1950s when Clean Air Acts were introduced. I recall watching a sweep at work in my home several times. First, he draped sheets of cloth around the fireplace to catch the soot. Second, he fed a circular wire brush through a hole in the drapes and pushed it gradually up the chimney using lengths of flexible rods that screwed into one another. (In the painting he carries a bundle of such rods across his shoulders.) Third, he dismantled his tools and tidied up. Obviously, cleaning chimneys was dirty work and the sweep's clothes and face were generally blackened with soot.
Unless a strong wind was blowing, the smoke from hundreds of chimneys accumulated - especially under low clouds - to produce a smog (that is, smoke plus fog) that was unhealthy to breathe. Visibility was also reduced by the polluted air. Grimsby, being a coastal town, did not generally suffer from smog for very long because of the breezes from the North Sea.
The sweep is walking along Garibaldi St, Grimsby away from Albion St towards Freeman St. On the extreme right is a cream painted ex-religious building being used as a garage. (Originally, it was a Primitive Methodist Chapel seating 650, dating from 1863.) The building beyond it used to be called Foresters’ Hall because it was home to the friendly, mutual aid society the Ancient Order of Foresters (founded in 1834). Later, it housed the Unity Club and a bookmakers run by the Warner family. I was born two streets away and as a child in the 1940s and 1950s I noticed that the name of this street was exotic and Italian but it was only much later that I learnt that it had been named after Giuseppe Garibaldi (1807-82) the Italian nationalist, liberal politician and revolutionary leader who had been immensely popular with the Victorians. Garibaldi, in fact, visited England in 1864 and was greeted as a hero. All the houses, shops and other buildings visible in the painting have since been demolished.

License:
All rights reserved. Exhibited on USEUM with the permission of the rights owner.
For more:
http://2015