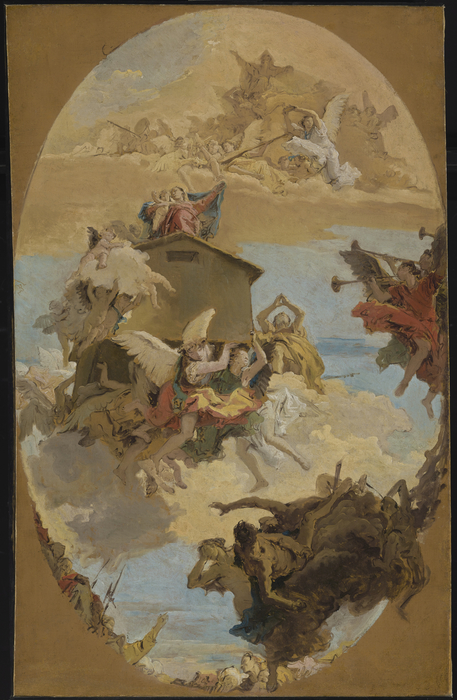 The Miracle of the Holy House of Loreto

1743
Giambattista Tiepolo made this final preparatory study for a large illusionistic fresco that covered the ceiling of the Scalzi church in Venice. The fresco was destroyed by bombing in World War I. According to a fifteenth-century legend, when the Virgin Mary's house in Nazareth came under threat by invading Saracen armies, it was miraculously transported in 1291 from the Holy Land to Loreto, a small town on Italy's Adriatic coast.

Using an oval shape, Tiepolo painted the scene in three parts, depicting the figures in the lowest register in large scale and those near the top much smaller in size. This technique, called di sotto in sù (from below upward) gives the viewer the illusion that the scene is an extension of his space: the ceiling of the church opens up to reveal the events of the miracle. In the upper register, painted in golden hues, God the Father and the dove of the Holy Spirit preside amidst a chorus of music-making angels. The central area of the canvas features the Virgin and Child and the Holy House borne aloft by angels. Saint Joseph, with his arms raised overhead, accompanies them. On the right, three trumpeting angels announce the event. In the lowest register, closest to the viewer's space, a mass of dark figures personifying evil recoil and fall away from the Holy House. Other figures, some wearing turbans and carrying weapons symbolizing the invading Saracens, watch from the periphery.