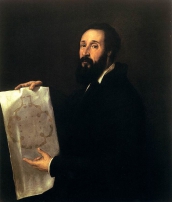 Giulio Romano (b. before 1499, Rome - d. 1546 Mantua, Italy) was so famous in the century after his death that he is the only "modern" artist mentioned by Shakespeare in a play. A Roman native, by about 1515 he was working for Raphael in the Vatican, eventually becoming the master's most trusted aide. Raphael's late works indicate the increasing torsion and tension that Mannerist artists like Giulio would bring to full flower, ideas that Giulio accentuated even while Raphael was alive.

At Raphael's death in 1520, Giulio inherited direction of the master's shop and completed many of his projects. In the Vatican's Sala di Costantino, Giulio modified Raphael's plans and created the first statement of Mannerism on a grand scale in Rome. In 1524, Giulio became court painter and architect for Federigo Gonzaga, spending the rest of his life in Mantua, where he directed virtually all artistic activity. Giulio's most important work is the Palazzo del Tè, which he built and decorated from 1527 to 1534, breaking with the conventions of classical architecture in the same way that he had bent the rules of Italian Renaissance painting with his Mannerist canvases.