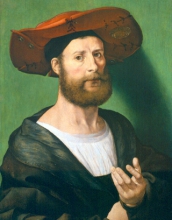 Jan Gossaert (c. 1478 – 1 October 1532), sometimes called Mabuse, is often described as a pioneering 'Romanist': he was one of the first Flemish artists to travel to Italy, and to use aspects of Italian art in the Netherlands.

Gossaert was also a notable portraitist. In 1503 he became a member of the painters' guild in Antwerp. He worked for Philip of Burgundy, with whom he travelled to Italy in 1508, and from then on enjoyed noble patronage. Dating his pictures remains difficult. A large proportion of his later work consists of penetrating portraits. In these the attention to detail of the Northern portrait tradition is retained.

Gossaert's experience of Italian art, however, radically affected his output. He adopted ideas from classical art and from 16th-century works, and created statuesque nudes.