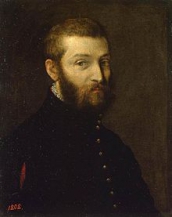 Paolo (1528 - 1588) was born in Verona – hence his nickname 'Veronese'. His father was a stonecutter and his mother was the illegitimate daughter of a nobleman called Caliari, a name the artist adopted in the 1550s. Veronese moved to Venice in the early 1550s and stayed there for the rest of his life, becoming one of the leading painters of the 16th century.

He was trained in Verona by Antonio Badile (about 1518–1560) whose daughter he married in 1566. Subsequently, it seems he served a stint in the studio of Giovanni Battista Caroto (1488–about 1563/6). The roots of his style may be located in the antique architecture and sculpture of Verona, but are ultimately his own synthesis of Central and Northern Italian influences.

In Venice, Titian's approach to composition, narrative, and colouring was crucial for Veronese, but his work is characterised by principles of harmony and compositional cohesion that owe as much to Raphael and the Central Italian tradition as to the Venetian. The flowing, sinuous line of Parmigianino is also an important precedent.

Giulio Romano and his Venetian colleague and rival Tintoretto were also significant touchstones at various points of Veronese's career, but his outlook is ultimately classical and harmonious in a way we tend not to associate with their work, and what has come more broadly to be understood as Mannerism.

For most of his career, Veronese worked for patrons, religious and secular, in Venice and the Veneto. Among his important works are the full-scale decoration of the Venetian church of S. Sebastiano (1555–around 1570), his ceiling and wall paintings for the library of S. Marco (1556–57) and the Ducal Palace (early 1550s and 1575–82), and his fresco decorations of the Villa Barbaro at Maser (around 1560), as well as a range of major altarpieces. From the 1560s onwards he also produced mythological pictures for an international clientele.

One of his specialities were large-scale scenes of feasts, and one of these, a Last Supper painted for a Dominican friar in 1573 (now in the Accademia in Venice), provoked the Inquisition because it included a wealth of what the inquisitors perceived to be irreverent detail. Veronese defended the painter’s right to ‘take the same licence as poets and jesters take’. He eventually changed the title to ‘Supper in the House of Levi’, rather than revise the painting itself.

Veronese ran a large workshop, assisted by his brother Benedetto and his sons Gabriele and Carlo (or 'Carletto'). They carried on his studio after his death.