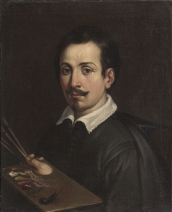 "He had about him a certain air of grandeur and gravity that exceeded his station in life, which produced in everyone, even those of high rank, a hidden veneration and respect."

So wrote an early biographer of Guido Reni (b. 1575, Calvenzano, Italy - d. 1642 Bologna, Italy). Reni first studied alongside Domenichino in a Flemish painter's studio in Bologna; ten years later he joined the Carracci academy to learn their classicizing style. In 1599 he entered the painters' guild. Reni created easel paintings and large decorations in Rome, Naples, Mantua, and Bologna, for patrons including Pope Paul V and Italy's top royalty. His graceful, classical style featured refined colors, delicate and varied flesh tones, soft modeling, and gentle emotion that owes a debt to Raphael's work. Reni the man was notoriously pious and eccentric. He disliked and feared women, whom he barred from his house even as servants, yet he was devoted to his mother and renowned for his heartfelt Madonnas. "The fear of God was always the first advice that Reni gave his pupils," his biographer wrote. After Lodovico Carracci's death in 1619, Reni's large studio dominated the Bolognese school, and his fame spread throughout Europe. Giovanni Lanfranco and Antonio Carracci were among his assistants.