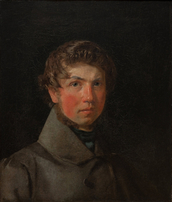 Christen Schiellerup Købke (26 May 1810 – 7 February 1848), Danish painter, was born in Copenhagen to Peter Berendt Købke, a baker, and his wife Cecilie Margrete. He was one of 11 children. Købke is one of the best known artists belonging to the Golden Age of Danish Painting.

The View of the Plaster Cast Collection at Charlottenborg Palace
In 1815 the family moved from a bakery near Hillerød to Kastellet, a military fortification area in Copenhagen, where his father was head baker. At the age of 11 he suffered from a bout of rheumatic fever. He made many drawings during his convalescence and decided that he would become an artist.

In 1822 at 12 years of age he started his studies at Royal Danish Academy of Art (Det Kongelige Danske Kunstakademi). He studied first in the drawing class, then under Christian August Lorentzen’s painting studio, and finally 4 years under Christoffer Wilhelm Eckersberg after Lorentzen’s death in 1828. Eckersberg stressed observance of nature, and Købke’s talent grew under Eckersberg’s disciplined training. Eckersberg’s influence is readily seen in Købke’s first mature work "View of Århus Cathedral" (Parti af Århus Domkirke) painted in 1829. The painting was purchased by the Art Union (Kunstforening) and is now in the collection of the National Art Museum (Statens Museum for Kunst).

He lived in Kastellet until 1833 and made many paintings of the area. His painting "Gården ved bageriet i Kastellet" (ca. 1832) hangs in the Ny Carlsberg Glyptotek museum in Copenhagen.

In 1832 he shared a studio with friend, landscape painter Frederik Hansen Sødring. He painted a portrait of Sødring which now hangs in the Hirschsprung Collection.

In 1834 he moved, along with his parents, outside of Copenhagen’s fortifications near Sortedamssøen, a lake area. He painted many views overlooking the lake towards the city and the embankments surrounding the city. His work becomes larger, more monumental.

Like many of his contemporary artists he came under the influence of Niels Lauritz Høyen, art historian, who promoted a nationalistic art. Høyen called for artists to search for subject matter in the folk life of their country instead of searching for themes in other lands, such as Italy (which was at that time considered a requirement for an artist’s training). On a visit to Hillerød in 1835 he painted a romantic picture of Frederiksborg Palace, "Frederiksborg Slot ved Aftenbelysning" ("Frederiksborg Palace in the Evening Light").

In 1838 he received a travel stipend from the Academy, left his new wife and traveled over Dresden and Munich to Italy accompanied by decorative painter Georg Hilker. They arrived in Rome by year’s end where he met brother-in-law Frederik Christopher Krohn, sculptor and medallionist, and many other Danish artists. He traveled, along with Constantin Hansen the following summer to Naples, Sorrento, Pompeii and Capri where he painted out in the open air.

Havetrappen ved kunstnerens malestue på Blegdammen (c.1845), a depiction of the artist's studio in Copenhagen.
He returned home in 1840 with a large collection of sketches for later use and inspiration. Unfortunately, most his later work with these Italian themes was uninspired, and they found little favor. Købke even considered at the time becoming a decoration painter, having participated in 1844-1845 in the decoration of the Thorvaldsens Museum, a museum dedicated to the artistic works of Bertel Thorvaldsen.

Two years after his father died in 1843 the family sold the property outside Copenhagen, and Købke moved back into the city. His application for admission to the Academy, which was accompanied by one of his failed Italian landscapes, was rejected in 1846. He died in 1848 of pneumonia, and is buried in Assistens Kirkegård.

Købke, a national romantic, painted portraits, landscapes and architectural paintings. Most of Købke’s portraits show friends, family members and fellow artists. He found most of his motifs in his immediate surroundings. Now he is recognized internationally for his well composed and harmonic paintings, for their coloristic qualities and for his sense of the everyday life. But in his lifetime he was almost forgotten, especially because of his early death and limited production. Despite his talent and the praise of various contemporaries, Købke had never been inundated with commissions.

Købke is recognized today as one of the most talented among Denmark’s Golden Age painters and the most internationally renowned Danish painter of his generation. The painterly interpretations he made of his surroundings stand as highpoints of the period.

His works are in the collections of not only Danish museums but also such international museums as the J. Paul Getty Museum and the Scottish National Gallery in Edinburgh.
more >
4