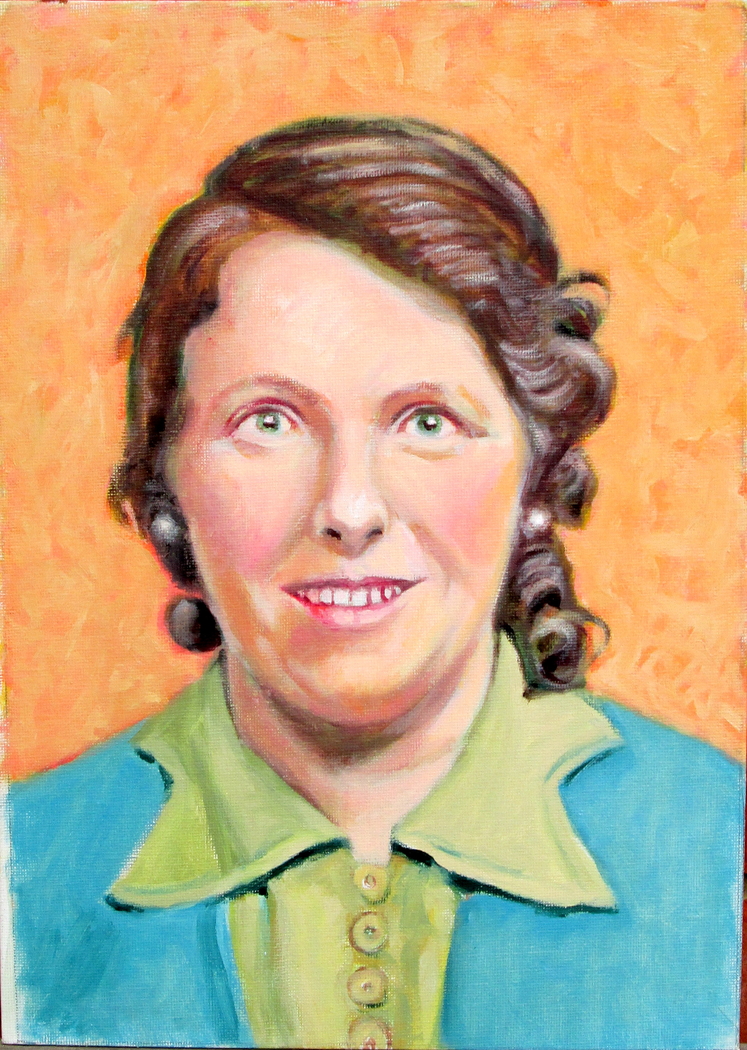 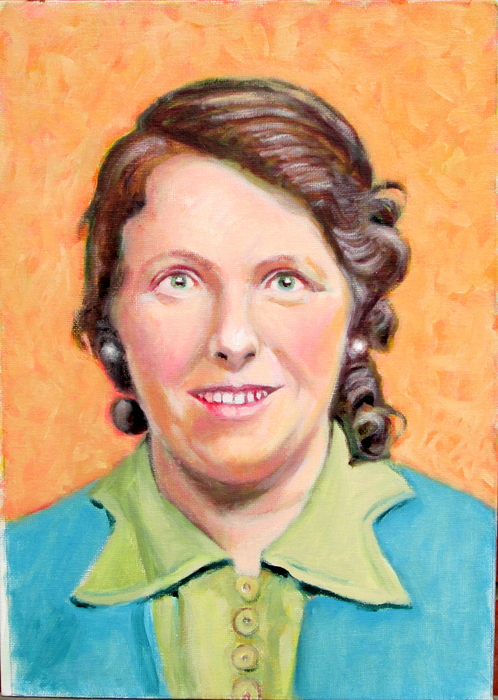 2016
'Connie Walker, 1940s' (9/2016), oil on board, 14 x 10 inches
---------------------------------------------------------------
This is a portrait of my mother Constance Hilda Walker as a vivacious and attractive young woman in the 1940s based on a family photo. Connie was adopted at the age of one by the Beel family who lived at 118 Nelson St, Grimsby. John William Beel (b 1878), a dock labourer, his wife Georgina (b 1880) and two sons John and Herbert. A mystery surrounds Connie - why did her real parents give her away? When I asked my mother about them, her reply was 'Since they were not interested in raising me, I was not interested in finding out about them'. Census records and newspaper reports reveal that she was born in Hull to Michael Hynes (b 1874 or 75) an Irish immigrant (from the village of Aughamore, County Mayo, West Ireland) who became a fireman and policeman (the two roles were often combined at that time) and Ruth Hynes (b 1975) who hailed from Hull and whose maiden name was Grainger. The Hynes lived at 1 King St, Hull and had six children: Alfred, Evelyn, Harold, Horace, Nora and Constance. It may have been that Ruth was in poor health and could not cope with another baby and so arranged for Connie to be adopted. But why this was not organised in Hull remains a puzzle. The adoption may have been facilitated by Alfred Grainger, Ruth's brother, because he was listed in the 1911 census as a grocer living at 20 Oxford St, Grimsby. Ruth Grainger was born in Hull in 1875 and her father William was a police sergeant (who, I presume, introduced constable Michael Hynes to his daughter). Michael received commendations for his role as a police constable and detective - catching runaway horses and fighting a major fire in which he nearly lost his life. He died in 1916 aged 42. Ruth died in 1919 aged 44.
Connie married Albert Walker in 1932 at St Lukes Church and they rented a red brick terraced house at 105 Newmarket St, Grimsby until around 1950 when they bought a house further away from the centre of town - 15 Ariston St, off Carr Lane - it was still a terraced house. They had three children - Audrey (b 1933) who died a few months after birth, John Albert (b 1938) and Christine (b 1940). Connie was a dedicated housewife and loving mother but rather anxious and prudish. She worried too much about what other people thought. Bravely she coped with two small children and a deaf mother during WW2, with rationing and bombing raids, while her husband was away in the army. For a time, she even took in lodgers - the Mayor or Meyer family, Blitz refugees from Dukes Ave, New Malden in Surrey (the street was hit by two bombs in 1940) - and after the war the two families kept in touch. The Mayors once lent us their house so that we could enjoy a holiday in the South and see the sights of London. Connie was a very hard worker and after her offspring were at school, she worked part time as a shop assistant and in later life as an office cleaner. The double income enabled the fitting of an indoor toilet and bath, plus the purchase of consumer goods such as a fridge and a TV set. Albert and Connie never owned a car. However, in the 1950s they did own or hire a bungalow at Humberston where annual holidays and weekends could be enjoyed during summer months. After her children had left home and her husband had died, Connie sold her house and moved to Portugal to live with her daughter's family - the Parkins. Gradually she became blind from glaucoma and eventually returned to England to reside in a home for the blind in Wanstead, East London. She died in Whipps Cross Hospital in 1991.