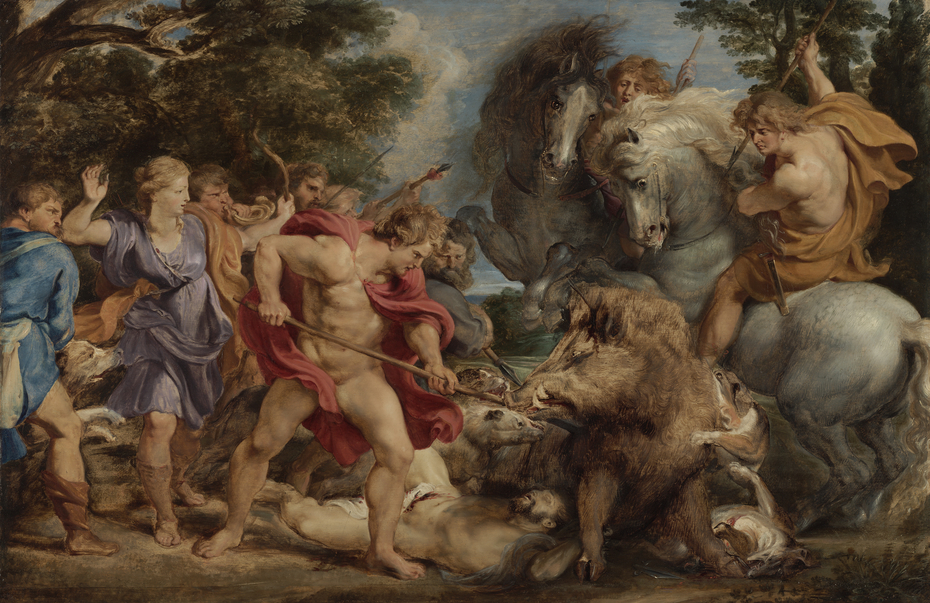 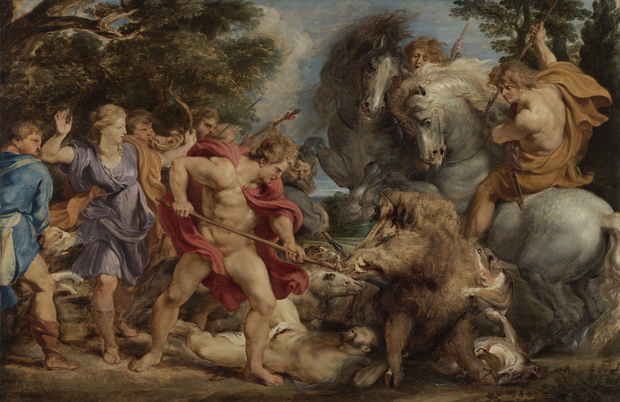 1611 - 1612
The boar was furiously twisting its body round and round, its jaws slavering with foam and fresh blood...the hero who had dealt the wound came up close to the animal and roused his foe to fury, before finally burying his shining spear in its shoulder.
--Ovid, Metamorphoses

Wrapped in a flowing red cape, the warrior Meleager thrusts his spear into the shoulder of a massive boar. The ferocious creature--seemingly undaunted by a pair of hounds latched onto its bristled hide--has turned to confront head-on its human adversary. Meleager's blow will prove to be fatal to the boar, but the beast has proven itself as a fearsome foe. Beneath its imposing hooves lie the disemboweled carcass of a hound and the prostrate corpse of the hunter Ancaeus.

The story of the Calydonian boar hunt was told and retold during antiquity--most famously in Ovid's Metamorphoses. When King Oeneus of Calydon failed to honor the goddess Diana with offerings, she released a terrifying boar on his land. The king's son, Meleager, assembled a group of renowned warriors to slay the beast. Several of the huntsmen were killed or maimed before Meleager finally defeated the boar. He presented its head as a trophy to his beloved, the huntress Atalanta, who is seen behind Meleager, with bow in hand.

Peter Paul Rubens created this painting a few years after an extended stay in Italy. He drew from ancient sarcophagi and statues he had seen there for the poses of many of the figures. For example, the boar seen in profile was taken directly from a well-known marble in Florence's Uffizi Gallery. Rubens's appropriation of iconic images from antiquity was intended to resonate with learned viewers. For the figures on horseback, Rubens borrowed from his Renaissance predecessors, Leonardo da Vinci and Raphael. But Rubens's dynamic and inventive interpretation of the hunt was wholly his own. With this painting, he established the theme of the epic combat between man and animal, a subject to which he would return throughout his career.

License:
Courtesy of The Getty
For more:
http://www.getty.edu/art/collection/objects/226430/peter-pa…