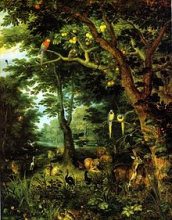 Jan Brueghel the Younger (b. 1601, Antwerp, Belgium - d. 1678 Antwerp, Belgium) devoted his career to carrying on his father's painting style. Demand was high for big, decorative landscapes and works by fijnschilders, painters of meticulous detail, who worked in the vein of Jan Brueghel the Elder. To satisfy the market, Jan the Younger sometimes copied his father's works and sold them under his father's signature. In consequence, it is often difficult to distinguish their styles, though Jan the Younger's few dated pictures show lighter colors and less precise drawing.

After training under his father, Jan the Younger went to Italy in 1624, traveling with his childhood friend Anthony van Dyck. When Jan the Elder died suddenly in a cholera epidemic, Jan the Younger took over his father's busy Antwerp studio. He became dean of Antwerp's guild in 1630. His clients included the Austrian and French courts, and he may have visited France in the 1650s. While Jan the Younger painted many subjects, he is best known for landscapes whose subjects ranged from villages, to mythological scenes, to allegories and, to a new category, animals in landscapes. His allegories depicted the senses, the elements, the seasons, and abundance. Like his father, he created landscape backgrounds for many painters, including Peter Paul Rubens and Hendrick van Balen.