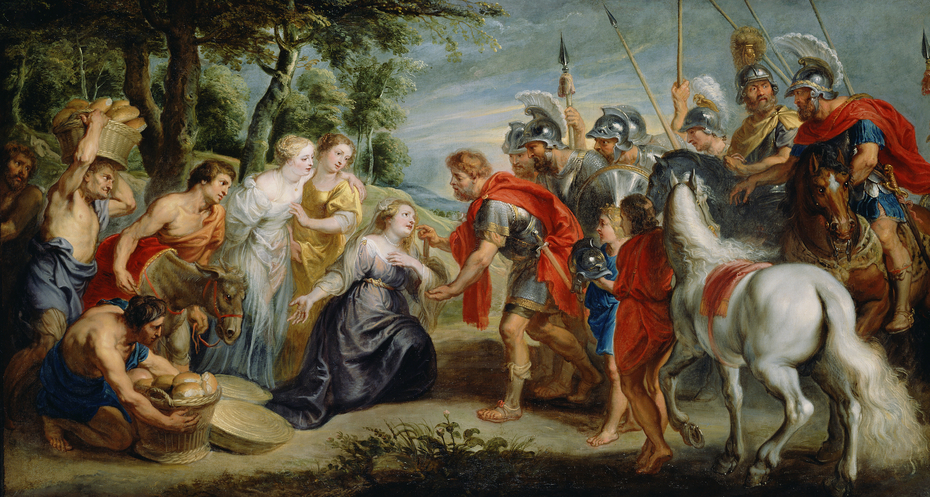 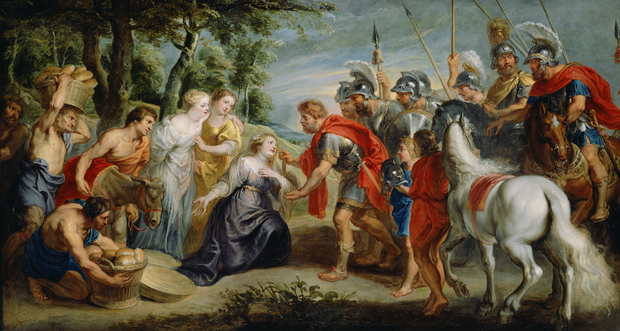 With its horizontal format, this biblical scene of classically proportioned figures arranged in graceful poses resembles an ancient Roman frieze. Facial expressions and dramatic gestures serve a narrative purpose, revealing the story for the viewer. Rubens used vivid reds, blues, and yellows to describe shimmering silks and heavy cloaks. On the right, helmets and armor worn by the soldiers gleam in the bright sunlight.

The painting depicts the meeting of Abigail and David. Abigail's husband, Nabal of Carmel, foolishly refused to pay for the protection that David had provided for Nabal's shepherds. Angered, David set off to avenge this misdeed with a large group of soldiers. Seeking forgiveness for her husband's offense, Abigail, shown kneeling in the foreground on the left, offers bread, wine, corn, raisins, and fig-cakes to David and his men. Impressed by Abigail's beauty and generosity, David dismounts and attempts to raise Abigail up. Although not shown here, the story ends with Nabal's dying from a stroke after learning of the disaster his wife had averted. David then proposed marriage to Abigail.

License:
Courtesy of The Getty
For more:
http://www.getty.edu/art/collection/objects/631/workshop-of…