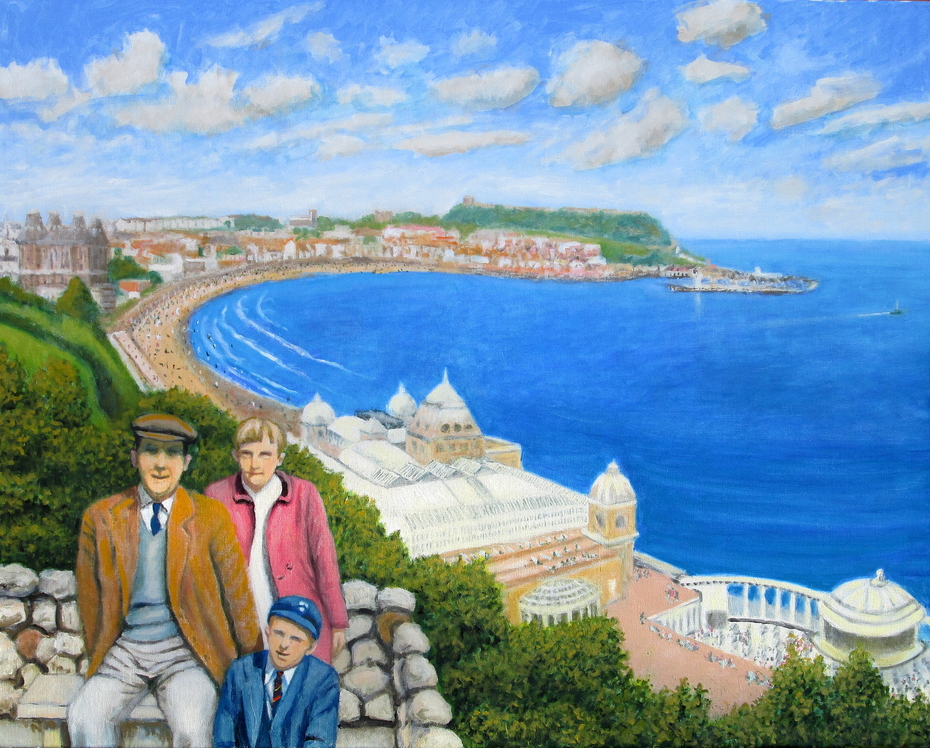 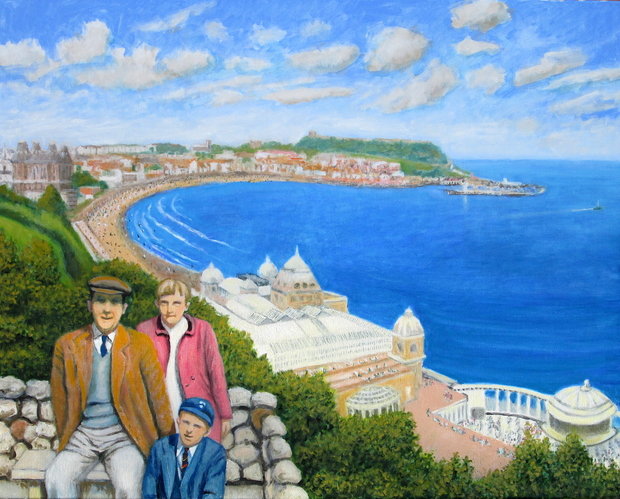 2017
oil on linen, 2017, 100 x 80 cm.
Albert, Christine and John Walker on holiday in Scarborough, Yorkshire circa 1950. My mother must have taken the snap on which the portraits were based. Since my parents could not afford foreign holidays, they used to buy a roving railway ticket which enabled daily excursions from Grimsby Town station to different destinations for a week or fortnight. In this way we travelled around the region to Lincoln, Boston Spa, Mablethorpe, Louth, Stamford and Skegness in Lincolnshire and Scarborough, Bridlington, Hull, York and Whitby in Yorkshire. We took packed lunches to cut costs. Each day’s trip, therefore, was an adventure by steam train. Rail carriages at that time often featured vividly coloured posters of the towns and resorts we were to visit, thereby providing visual foretastes of the places to come. Prints of the posters – a popular art form - are now preserved in the National Railway Museum collection, York.

1935 London & North Eastern Railway (LNER) poster with artwork by W. Smithson Broadhead (1888-1951), a painter of portraits and horses.
-----------------------------------------------------------------
Scarborough, known as the ‘Queen of resorts’, had an exceptional range of facilities and attractions including cafes, restaurants, theatres, cinemas, dance halls, music festivals, tennis courts, parks with lakes, a geology museum, amusement arcades, boat/fishing trips, promenades, etc. Buildings are set on limestone cliffs around two bays with sandy beaches. The one depicted is South Bay. Bottom right-hand corner is a sun arena with a bandstand where an orchestra played. Above it is a multiple purpose spa. On the horizon is a headland with a harbour and lighthouse. On its crest are the ruins of a 12th century castle. The resort has many hotels but its most famous and impressive – seen on the far left – is the Grand Hotel. It opened in 1867 and was then one of the largest in Europe (365 bedrooms).