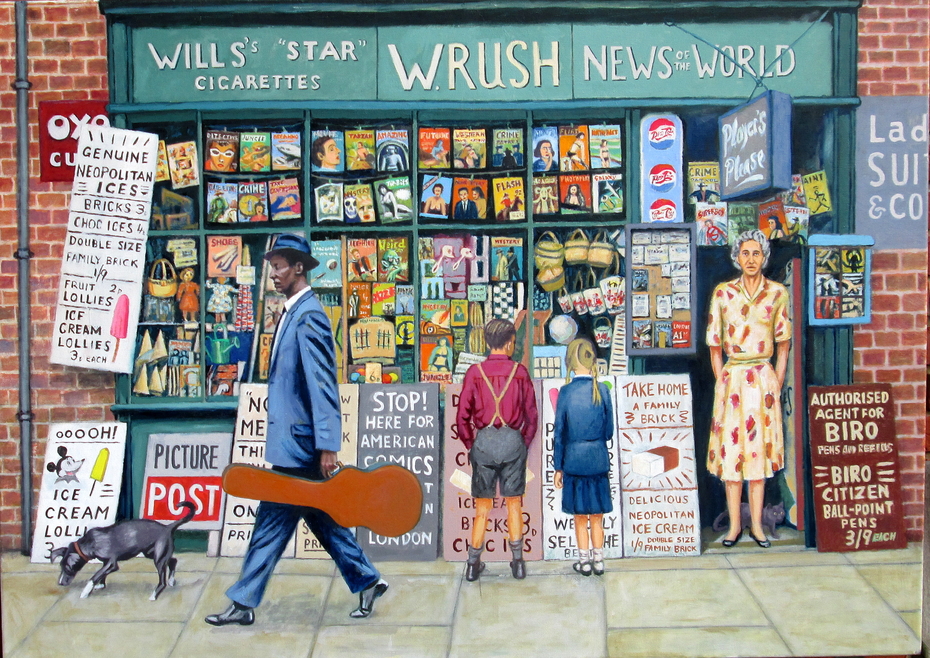 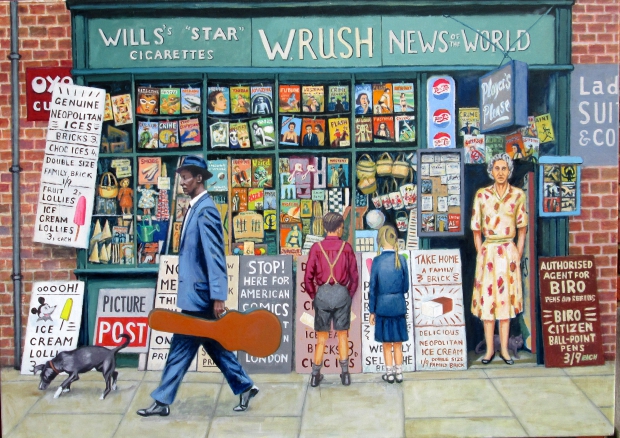 During the 1940s and 1950s, in British cities, there were large, working class areas of smoke-blackened, brick terraces dating from Victorian times.

This drab, uniform environment was relieved by the presence of corner shops, pubs and newsagents. The latter provided a splash of colour in the form of magazines and comics with illustrated covers. Window displays and advertising boards placed in the street were overloaded with products, slogans and brand names; hence they provided abundance and visual pleasure in an era of scarcity. The shops were a source of oral pleasure too because they stocked soft drinks, ice cream and ice lollies, sweets and tobacco/cigarettes. (Sweet rationing began during World War II and ended in 1953.)

The morning and evening newspapers the shops sold/delivered kept readers abreast of local news and world affairs. In addition, the newsagents often sold small toys and stationary including the new ballpoint, Biro pens. The range of comics and magazines on offer was wide and catered for women, men and children. The subjects covered included Westerns, humour, adventure stories, romance, detective and crime, science fiction, song books, scandal and gossip, glamour and celebrity, and Hollywood film stars. Sexual titillation was provided by pulp fiction gangster novels by 'Hank Janson' (frequently sold under the counter) and by nudist magazines - Health and Effeciency - and by pin-up and girlie magazines such as Razzle, Men Only, Flirt, Whisper, Wink, Eyeful and Beauty Parade, and by Sunday papers such as the News of the World. Many publications were American - Saturday Evening Post, Life, True Crime - and so were the drinks - Pepsi and Coca Cola. The superheroes, icons and mass appeal of American popular culture were as evident in the newsagents as in the cinemas and the record stores.

The presence in the painting of a black pedestrian carrying a guitar case signifies the increasing numbers of Afro-Carribbeans who were encouraged to come to Britain from 1948 onwards - the so-called 'Windrush generation'. One cultural consequence was that the Caribbean musical genre called 'Calypso' became popular in Britain. During the 1950s, newsagents attracted the attention of artist-photographers such as Nigel Henderson of the Independent Group who documented them as part of their interest in pop culture and working class street life. 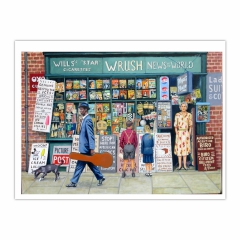