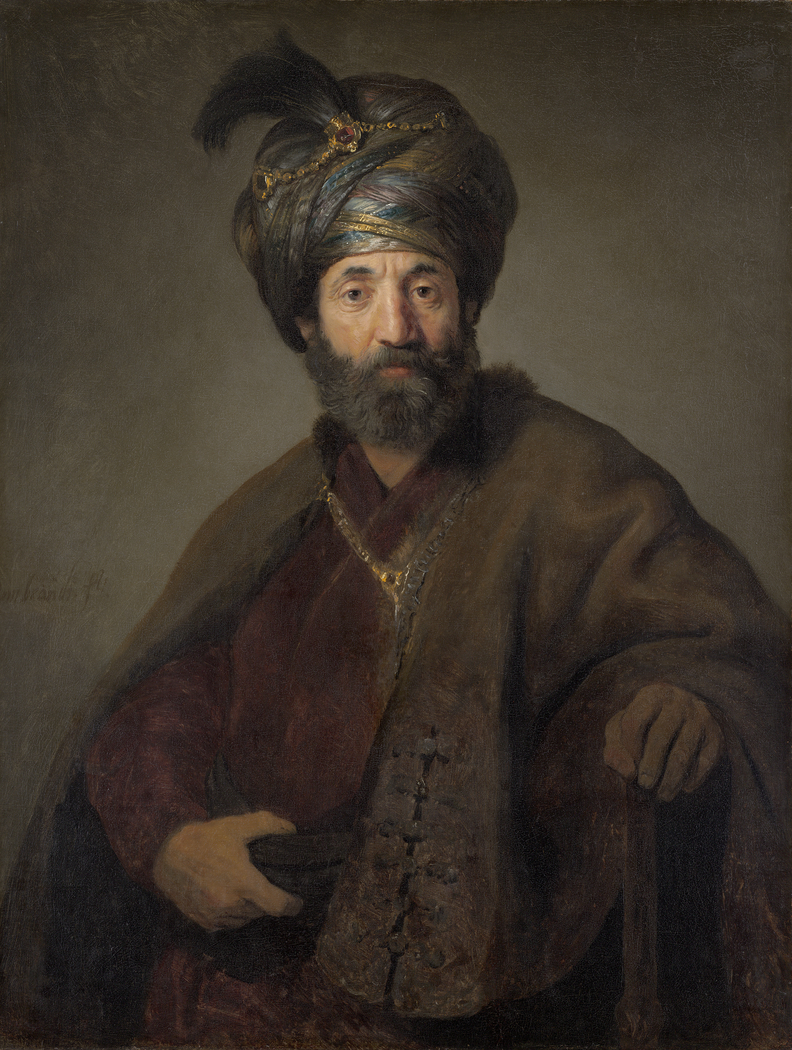 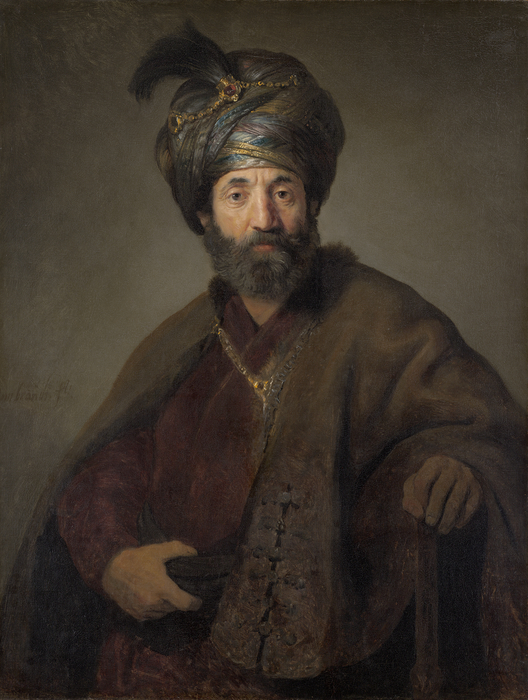 1635
After learning the fundamentals of drawing and painting in his native Leiden, Rembrandt van Rijn went to Amsterdam in 1624 to study for six months with Pieter Lastman (1583–1633), a famous history painter. Upon completion of his training Rembrandt returned to Leiden. Around 1632 he moved to Amsterdam, quickly establishing himself as the town’s leading artist, specializing in history paintings and portraiture. He received many commissions and attracted a number of students who came to learn his method of painting.

In this imposing half-length image, a bearded man wearing an elaborate, bejeweled turban stares out at the viewer, his features strongly modeled by light streaming in from the left. A fur-lined cape, loosely clasped at the neck with a gold chain, covers his shoulders. His right hand grasps the sash that wraps around his waist, while his other hand rests on a wooden staff. An aigrette, a type of pin with a tuft of ornamental bird feathers that was a standard part of Ottoman attire, secures a heavy gold chain on the man’s turban.

Rembrandt, as a history painter, was particularly intrigued by the Middle East, where so many of the Biblical stories he frequently depicted had taken place. Rembrandt’s paintings, drawings, and etchings of the 1630s included numerous figures who wear Middle-Eastern garb. By the early seventeenth century the commercial enterprises of Dutch merchants had reached the Middle East, so exotically dressed foreigners were a familiar sight in the streets and marketplaces of Amsterdam. Exotic attire became a fashion fad, and Dutch men, including Rembrandt himself, would sometimes be portrayed wearing similar outfits. At the same time, Dutch collectors avidly sought to acquire exotica from all parts of the world, including shells, swords, musical instruments, and costumes, which they would then display for visitors to admire. Rembrandt owned such a collection, known as a kunstkamer, or cabinet of curiosities. His encyclopedic holdings of art and artifacts served as props for Rembrandt and his students, but the artist was also motivated to amass such a collection by his desire to be recognized as a full-fledged member of the class of gentlemen-collectors.