2010
This painting was based on a work in my art school sketchbook entitled THE EYE BETRAYED, 1956-61. In the two canvases imagery is dispersed across surface of the - no depth is attempted - and so there are multiple centres competing for the attention of the viewer’s eyes. The aim was to prolong the scanning/reading/interpretation processes in order to delay perception and extend visual pleasure. The ground of the canvas is a light ochre while the colours of the images are predominantly pink, cadmium red, Indian red, cobalt violet and sap green plus some touches of light green. Paint application was via brushes and rags and there are also areas of stains and splodges. Many of the original sketchbook images were derived intuitively or invented on the basis of what the stains and blotches suggested. The work of Arshile Gorky, Surrealism, dreams and the contents of the unconscious mind were obvious influences. The imagery is evocative of faces, eyes, mouths, spirals, amoeba, bacteria, fish, hair, tendrils, the internal organs and sexual orifices of the human body. It is hoped the paintings will induce a dream-like state of reverie. The original sketchbook images were executed in pen and ink and gouache and so there is a strongly graphic character to the paintings. The long oblong making up the two paintings (each 120 x 90 cm) placed side by side was derived from the double-page spread opening of the sketchbook. Horizontally, there is the suggestion of a landscape but within it - lying on its side - is a large head and thus the genre of portraiture is also present. 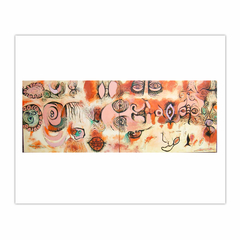