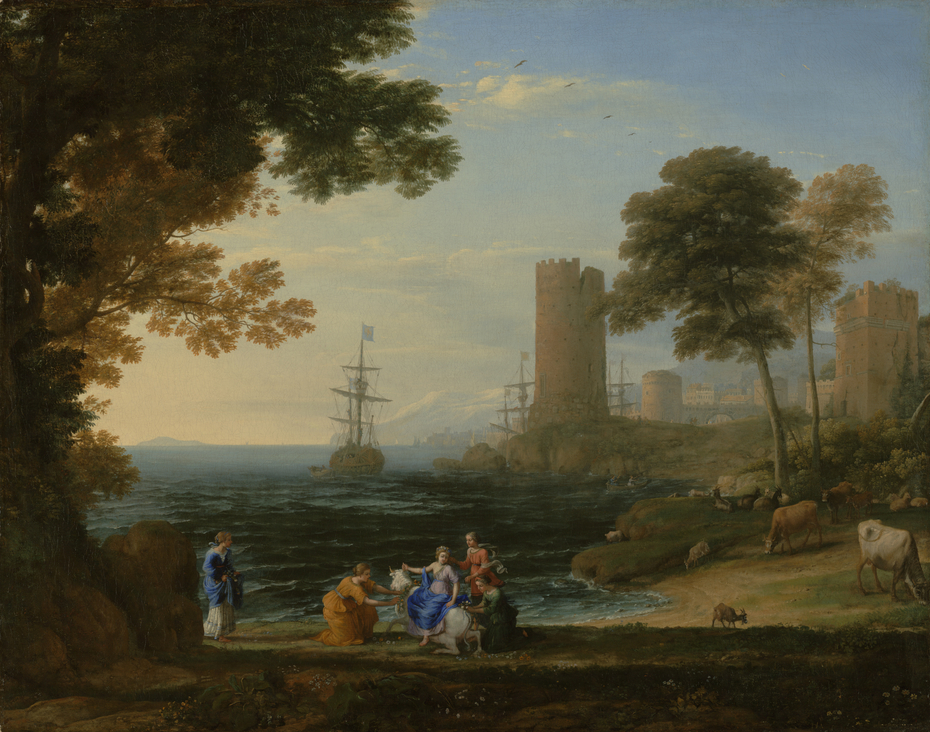 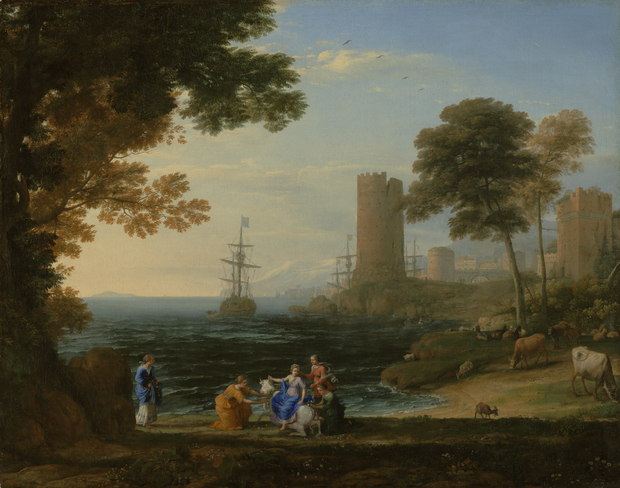 Coast View with the Abduction of Europa

1645
The maiden Europa rests atop a white bull, unaware it is the god Jupiter in disguise. According to the tale in Ovid's Metamorphoses, soon the animal will abduct her across the waves. Until then, she and her attendants festoon the seemingly innocent beast with flowers, while her blue drapery flutters in the breeze. In the upper right corner, a hazy poetic light illuminates her home city of Tyre, further evoking an idyllic antique world.

Claude Lorrain is known for painting complicated images that achieve a tranquil balance. This scene appears bucolic, but his composition and details also hint of impending danger. Beyond the field of delicate flowers, for example, a craggy tower looms. The women fail to notice that the bull is poised in anticipation, already straightening one of his legs for flight. Whitecaps gather behind them on the darkening sea, the backdrop to Europa's fate.

Even in his day, Claude was known for developing a style called the Ideal Landscape, in which nature on the canvas surpasses the real thing in its beauty, harmony, and refinement. Here he balances formal elements, like the upright trees, ship, and towers, against the open expanse of sea and sky. Offshore, he juxtaposes the huge galleon and all its impeccable detail in the rigging and carved decoration, with Europa still on land. The maritime theme also had a deeper resonance for Claude's contemporaries, as in art criticism, the abduction of Europa was compared to a ship leaving shore.

French by birth, and working in Rome, Claude often went into the countryside to do studies of nature. One of his hallmarks is the use of a unifying light, which gives this work a kind of gentle glow. The romance is punctuated by long shadows coming in from the left, distinctive of his favorite afternoon light, which help frame the drama at center stage.

License:
Courtesy of The Getty
For more:
http://www.getty.edu/art/collection/objects/240912/claude-l…