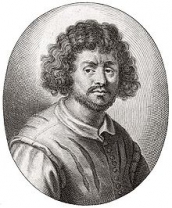 Claude Gellée (1604/5? - 1682) was born in the Duchy of Lorraine but left around 1612 for Germany, then Rome, where he became a studio assistant to the landscapist Agostino Tassi. He visited Naples and returned to Nancy before settling permanently in Rome around 1628. He sketched in the Roman countryside with Poussin. Ideas from the drawings he made were integrated into oil paintings finished in the studio.


Claude recorded his compositions in drawings, in the 'Liber Veritatis' (Book of Truth), now in the British Museum, perhaps to prevent pastiches being sold. Scottish and English aristocrats on the 18th-century Grand Tour bought many of his works; a number in the Collection come from such sources.

Claude was influenced by other northern painters who had worked in Rome, such as Elsheimer. He was also influenced by the Bolognese artists Annibale Carracci and Domenichino, who evolved the balanced classical landscapes he used.

In his turn Claude exerted considerable influence on landscape artists of the 18th and 19th centuries, as these examples show. The English painter Turner was especially indebted to Claude, and tried to outdo his grand compositions. In the Turner Bequest he directed that two of his works should hang with two of Claude's in the Gallery.