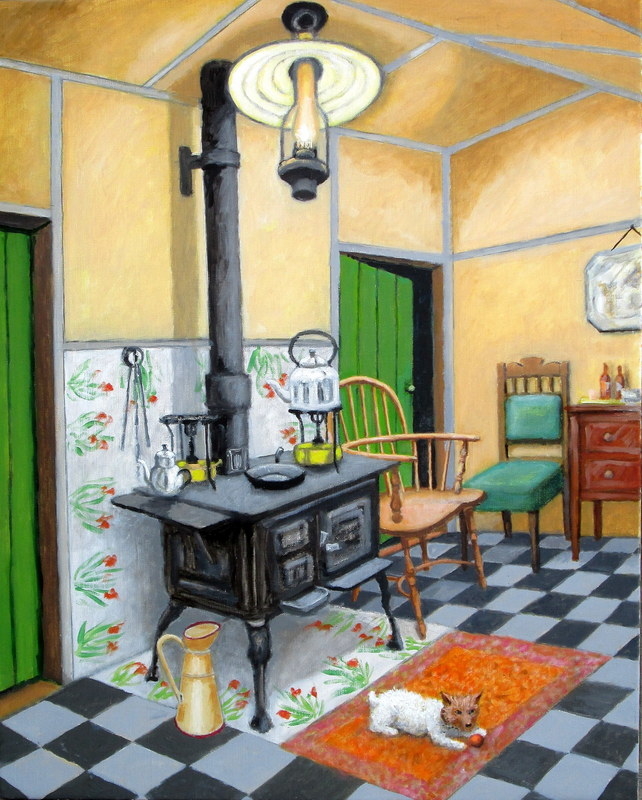 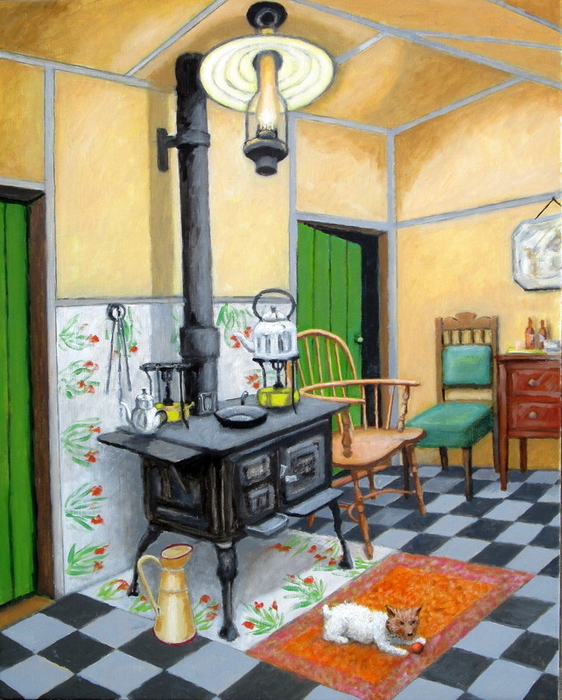 2016
Walker 'Bungalow Interior Humberston 1956,' (2016), oil on linen, 30 x 24 inches.
------------------------------------------------------------------------------
Humberston Fitties are a cluster of around 300 chalets and bungalows mostly built from wood on former salt marshes (“fitties”) on the Lincolnshire coast and Humber estuary near to Cleethorpes. They date from World War I and constitute an interesting example of English vernacular architecture. When the tide is out huge expanses of sand are exposed and along the beach there are large dunes ideal for children to play. During the 1950s, my parents rented such a bungalow for use during the summer months for weekends and week-long holidays. Loaded with supplies we travelled there by bicycle or bus from Grimsby. The bungalow had only three rooms - a living room and two bedrooms. It was situated on an oblong plot of land behind an embankment with an access road. To reach it from the road one walked across a small wooden bridge over a stream populated by tiny fish and frogs. At the rear was a rough track beyond which were the open fields and a farm. Unusually, the bungalow was surrounded by bushes and trees - including an apple tree. As there were no drains, a toilet was provided by a smelly cabin at the end of the garden. Since the wooden bungalow was raised off the ground, a crawl space existed in which hedgehogs lurked. Once my pet dog – a mongrel called ‘Lassie’ with a brown head and white body – foolishly tangled with a hedgehog and came off second best.
All in all, it was a picturesque setting with much to interest my sister Christine and I. There was no radio or television but my parents owned a wind up gramophone so music in the form of scratchy 78s with popular hits from the 1930s and 1940s entertained us. In the evenings we played cards and dominoes while my parents and their friends reminisced and gossiped about their youth, other family members and World War II; consequently, we children experienced informal oral history lessons. In 1956, when I was a teenager, I painted a watercolour of the bungalow's interior and in 2016 used this as the basis for an oil painting. As can be seen, lighting was via oil lamps because there was no gas or electricity. There was no running water either so it had to be carried daily in buckets and pitchers from a communal pump some distance away. (The water tasted of iron due to rusty pipes.) Cooking took place on a black, freestanding, cast iron, wood-burning stove and also on two primus stoves. This painting of Humberston evokes memories of halcyon days of summer sunshine and fresh air spent by the seaside. 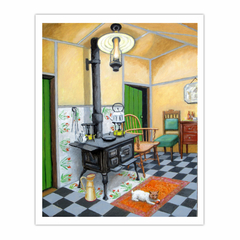