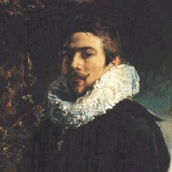 At fourteen, Jacob Jordaens (1593-1678), a merchant’s son in Antwerp, was apprenticed to Adam van Noort, who also taught Rubens. In 1615, he joined the artists guild and married Van Noort's daughter a year later. In addition to large history paintings, Jordaens produced genre paintings and portraits, as well as designs for tapestries. Unlike Van Dyck and Rubens, Jordaens was never a court painter. He survived his two rivals and became increasingly popular in the 1640s, with commissions from royal patrons, often abroad. He also produced paintings for the Orange room at Huis ten Bosch. Jordaens continued to live and work in Antwerp. He became a wealthy man and remained active until late in life. Around 1650 he converted to Protestantism, which was unusual in the Catholic Southern Netherlands.