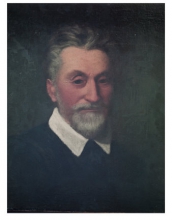 Dosso Dossi's father was a land agent for the Este court in Ferrara. By the age of twenty-five, Dosso (b. about 1490, Ferrara, Italy - d. 1542, Ferrara, Italy) had spent time in Mantua and probably Venice and had begun to paint cabinet pictures with religious and secular themes. By 1517 Dosso was also working for the dukes of Ferrara. He spent most of his career there, often collaborating with his brother Battista. The Este family valued the arts and fostered a court atmosphere of culture and refinement by assembling brilliant painters, writers, and musicians, including Raphael from Rome and Giovanni Bellini and Titian from Venice. Dosso became the leader of the Ferrarese school.

Dosso's art is fantastic, eccentric, personal. Many pictures still defy precise explanation because of their complex themes and obscure allegorical programs. From the beginning, landscape was a major element, founded on Giorgione's romantic concept of figures at ease in a landscape illuminated by a poetic, magical light. Dosso added Titian's rich color and his own personal quality of fantasy, partly inherited from Ferrarese forbears like Ercole de' Roberti. By 1520 Dosso may have gone to Rome, since he began incorporating Roman elements into his art, including poses from Michelangelo and the ancient Laocoön sculpture. After 1533 Battista played an increasingly dominant role; he took over the workshop at Dosso's death.