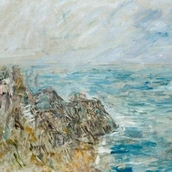 Le Havre has nurtured artists like Monet, Dubuffet, Friesz, Dufy and Braque. And MuMa is a pillar of the city's art history. Inaugurated in 1961 by André Malraux, then France's Minister of Cultural Affairs, MuMa is known for its late-19th and 20th-century collections. From the Impressionists to the Fauves, the museum's collections have been enriched by gifts such as works from the studio of Eugène Boudin and the Marande donation.

More recently, Hélène Senn-Foulds donated an impressive collection built up by her grandfather, Olivier Senn, in the early 20th century. Thanks to the donation, MuMa's collection of Impressionist works is today one of France's largest, and the public can now enjoy works by Renoir, Pissarro, Sisley, Degas, Courbet and Corot.