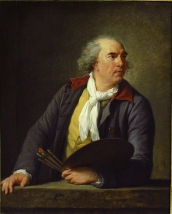 Blending fantasy and factual accuracy, Hubert Robert's views of classical and contemporary architecture were immensely popular during his lifetime. Robert (b. 1733 Paris - d. 1808 Paris) was best known for his paintings of ruins. His immense, crumbling monuments of an often-imaginary past earned him the nickname, "Robert des Ruines" (Robert of the Ruins).

Robert's career developed in Europe's most refined art circles of the 1700s. He received a thorough classical education in Paris and in 1754, arrived in Rome in the entourage of a French ambassador. He spent the next eleven years in Italy and there, developed his fascination with ruins. Because of the relatively recent excavations at Pompeii and Herculaneum, the archaeological climate in Rome was especially rich. Robert also developed close ties to Italian artists, including Giovanni Battista Piranesi and Giovanni Paolo Panini, and each influenced his artistic vision. He also developed a strong friendship with his drawing partner, Jean-Honoré Fragonard.

When Robert returned to Paris in 1765, his work was an immediate critical and public success. Promptly admitted to the Académie Royale, he exhibited regularly at the Paris Salon beginning in 1767. In addition to showing ruins, architecture, and landscapes of Italian derivation, Robert also depicted his native France. His views of Paris are among his most topographically accurate. With his success, Robert branched off into garden design and furnishings, and also created decorative ensembles of paintings for royalty and the wealthy. In 1778, he was awarded prestigious lodgings in the Louvre, where he lived until 1802. He was briefly imprisoned during the French Revolution but continued to paint and draw.