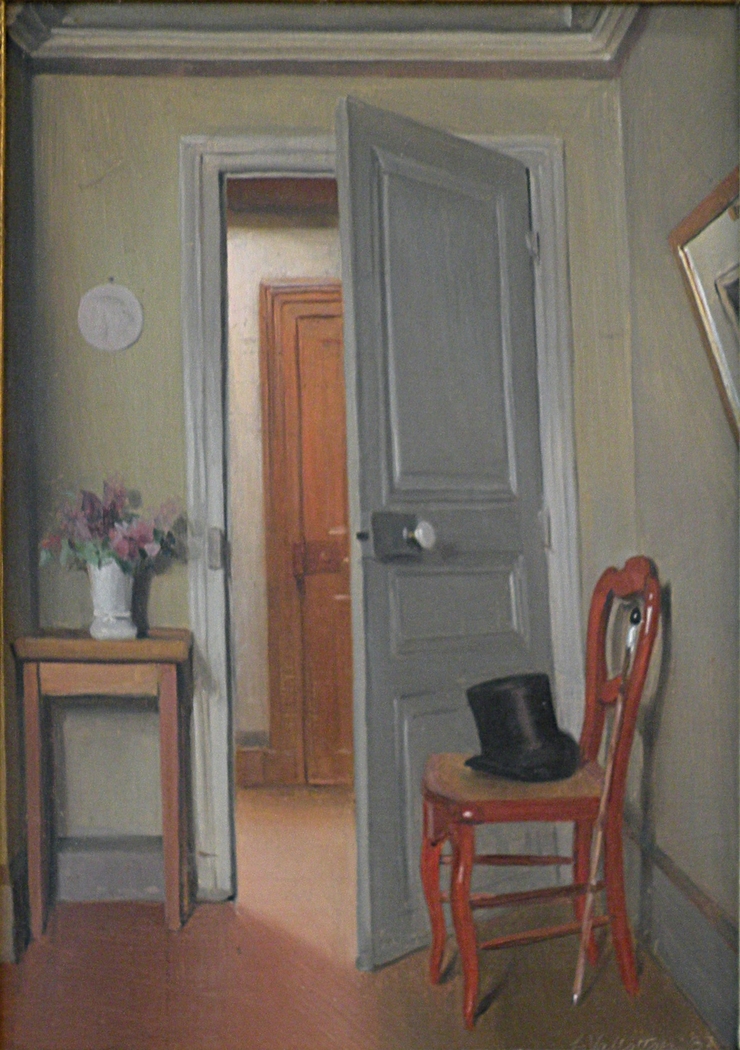 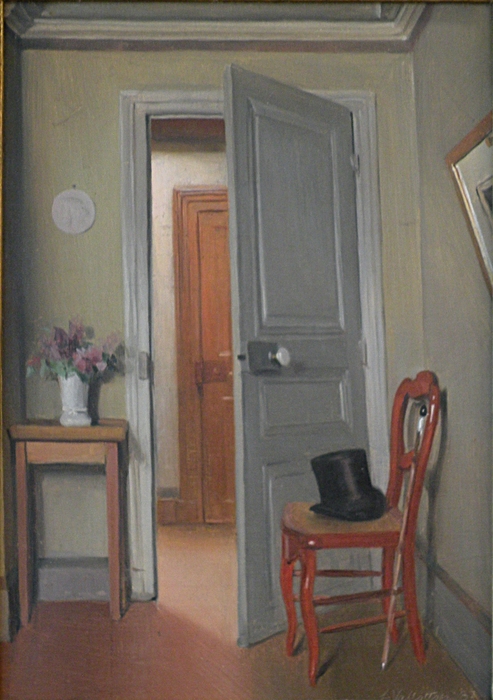 In this painting of an interior, Vallotton remains visibly true to the realist ambitions that had until then governed the construction of his portraits. The Visit, under the guise of flat objectivity—that desire to tell all that plagued the artist's beginnings—, pursues this exploration of the visual construction and inaugurates, a little ahead of the time, the ironic deformation of space that Vallotton would develop fully in his Nabi period. In a painting where nothing is happening, where nothing can really be imagined, Vallotton also introduces a few alterations intended to modify the perception of space. This is particularly convincing on the right side of the painting, in which the painter gradually dims the corner of the wall until it disappears behind the back of the chair. The true guiding lines on this side of the painting are the doorframe and the baseboard. Vallotton inflicts such warping that the corner of the wall disappears in favour of the frame and the baseboard which meet in the corner of the room. But above all, by distorting the perspective of the baseboard, the painter determines a convergence line, which, extended, cuts through the top hat to land right in the centre of the composition, on the lock of the door. To strengthen, if that were needed, this alluring effect of the lock, the artist uses a second convergence line that starts inside the head casing leaning exaggeratingly over the chair and also ends at the same place on the lock. The walking stick resting nonchalantly against the chair indicates the direction of the angle of the golden picture frame. The artist thus has perfect command of the construction of the painting: each object occupies a fixed place and particularly the door, whose opening could not be any larger or smaller without upsetting the entire balance and logic of the composition. The chair, top hat and walking stick are all contained in the exact lower-right quarter of the painting. The eye, once drawn to the focal point of the composition—an attraction facilitated by the intense light from the opening of the door—, is guided all the way to the true subject of the piece: the top hat. With its ability to recreate an intimist atmosphere and efficiently represent contemporary lifestyle, all with a real economy of means and dryness of style from which the artist rarely departed thereafter, this piece heralds, somewhat prematurely, the best of Vallotton's work.