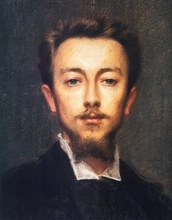 Édouard Joseph Dantan (Paris 26 August 1848 – 7 July 1897) was a French painter in the classical tradition. He was widely recognized in his day, although he was subsequently eclipsed by painters with more modern styles.

Édouard Joseph Dantan was born on 26 August 1848 in Paris. His grandfather, who had fought in the Napoleonic Wars, was a wood sculptor. His father, Antoine Laurent Dantan, and uncle, Jean-Pierre Dantan, were both well-known sculptors. Dantan was a pupil of Isidore Pils and Henri Lehmann at the École nationale supérieure des Beaux-Arts in Paris. At the age of nineteen he won a commission for a large mural painting of The Holy Trinity for the Hospice Brezin at Marne (Seine-et-Oise). Dantan's first exhibit at the Paris Salon was An Episode in the Destruction of Pompeii in 1869. In 1870 the Franco-Prussian War interrupted his work, and he enlisted in the defence force. He was given the rank of a sergeant, and was later promoted to lieutenant. During the war the family home was burned down.

For twelve years Dantan's companion was the model Agostina Segatori, who had also posed for artists such as Jean-Baptiste Corot, Jean-Léon Gérôme, Eugène Delacroix and Édouard Manet. She bore a child to Dantan, Jean-Pierre, in 1873. On their separation, Agostina opened Café du Tambourin on the Boulevard de Clichy that became a meeting place for artists.[fn 1] Dantan spent his summers in Villerville, where he died on 9 July 1897 when the carriage in which he was riding crashed violently into the village church.

Dantan's works followed the academic tradition of painting, and were praised by his contemporaries. His technical mastery is illustrated by such paintings as Un coin d'atelier (1880), where he depicts his father working on a bas-relief in his studio, seen from behind. The studio is cluttered with paintings and sculptures. In the foreground, a nude woman is taking a break from modelling. A critic praised the painting for following all the rules of trompe-l'oeil and stereoscopic photography. Describing a painting of a group of sailors following a clergyman going to bless the sea, another critic said in 1881 "he has written a page before which believers and skeptics must raise their hats".

His Le déjeuner du modèle exhibited in the Salon in 1881 shows a model eating a plate of eggs in a break from the posing session. The scene is illuminated by a clear white light, with a delicate sense of reflected light. One reviewer said that Dantan had treated the subject with taste and grace, when it could easily have fallen into vulgarity. He was by no means limited to one genre. Other paintings at this time included one of his mother outdoors in her invalid chair, her face sad, a pastoral portrait of a young blonde woman in a blue dress, full of life, and of a poor fisherman dining in his miserable cabin on a piece of bread and an onion.

Later, Dantan's classical style fell out of fashion. Writing of the first exhibition of the Société Nationale des Beaux-Arts in the Champ de Mars in 1890, Walter Sickert was scathingly critical of most of the paintings, making exceptions for a series of far-eastern landscapes by Louis-Jules Dumoulin, a painting by Édouard Manet, some portraits by Jules-Élie Delaunay and some studies by Dantan. He praised Dumoulin as a master, described Manet's work as brilliant and powerful, Delaunay's as respectable and Dantan's as conscientious.