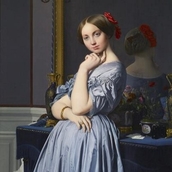 Housed in the New York City mansion built by Henry Clay Frick (1849-1919), one of America's most successful industrialists, are masterpieces of Western painting, sculpture, and decorative art, displayed in a serene and intimate setting. Each of the Collection's sixteen permanent galleries offers a unique presentation of artworks arranged for the most part without regard to period or national origin, akin to the way Mr. Frick enjoyed the art he loved before bequeathing it to the public. Both the mansion and the works within it serve as a monument to one of America's greatest art collectors.

Built in 1913-14 from designs by the firm Carrère and Hastings, the house is set back from Fifth Avenue by an elevated garden punctuated by three magnificent magnolia trees. Since Mr. Frick's death in 1919, the Collection has expanded both its physical dimensions and its holdings. Approximately one-third of the pictures have been acquired since then, and three times — in 1931–35, 1977, and in 2011 — the building has been enlarged to better serve the public.

At the Frick, visitors stroll from the airy, lighthearted Fragonard Room, named for that artist's large wall paintings of The Progress of Love and furnished with exceptional eighteenth-century French furniture and Sèvres porcelain, to the more austere atmosphere of the Living Hall, filled with masterpieces by Holbein, Titian, El Greco, and Bellini. Passing through the Library, rich with Italian bronzes and Chinese porcelain vases, one arrives at Mr. Frick's long West Gallery, hung with celebrated canvases including landscapes by Constable, Ruisdael, and Corot and portraits by Rembrandt and Velázquez. Vermeer's Mistress and Maid, the last painting Mr. Frick bought, is one of three pictures by that artist in the Collection, while Piero della Francesca's image of St. John the Evangelist, dominating the Enamels Room, is one of the few paintings by Piero in the United States. The East Gallery, often adorned with works by Goya, Van Dyck, Chardin, Greuze, and others, usually concludes a visit to the galleries and leads visitors to the serene space of the Garden Court, where they pause beneath the skylight, surrounded by greenery and the gentle sounds of the fountain.
more >
14