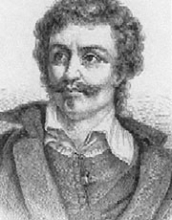 Jacob van Ruisdael (c.1628-1682) learned to paint from his father, a framemaker, art dealer, and painter, and from his uncle, Solomon van Ruysdael. After studying landscape painting in Germany for ten years, he settled in Amsterdam. There he maintained a flourishing painting studio, where he trained the next generation of Dutch landscape painters, including Meindert Hobbema. Ruisdael's dramatic, naturalistic rendering of landscapes and his emotional use of color support his reputation as the principal Dutch landscape painter in the second half of the 1600s. His masterful compositions, meticulous draftsmanship, and thick impasto made quiet subjects such as trees or the flat Dutch countryside into deep sources of contemplation. Though earlier Dutch artists used trees merely as decorative compositional devices, Ruisdael imbued them with forceful personalities. Similarly, the vast, clouded skies looming over low, distant horizons inject tension into his panoramic landscapes. In addition to making seven hundred paintings and one hundred drawings, Ruisdael received a medical degree in 1676 and probably pursued a successful second career as a surgeon.