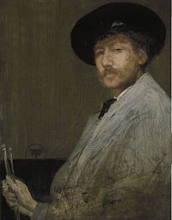 James Abbott McNeill Whistler (July 11, 1834 – July 17, 1903) was an American-born, British-based artist active during the American Gilded Age.
Born in in 1834 in Lowell, Massachusetts, the third son of West Point graduate and civil engineer Major George Washington Whistler, and his second wife Anna Matilda McNeill. After brief stays in Stonington, Connecticut, and Springfield, Massachusetts, the Whistlers moved to St. Petersburg, Russia, where the Major served as an engineer for the construction of a railroad line to Moscow. Whistler studied drawing there at the Imperial Academy of Science. In 1848 he went to live with his sister and her husband in London, and after his father's death the following year the family returned to the United States and settled in Pomfret, Connecticut. Whistler enrolled in the United States Military Academy at West Point in 1851, where he excelled in Robert W. Weir's drawing class. He was dismissed from the academy in 1854, and after brief periods working for the Winans Locomotive Works in Baltimore, and the drawings division of the United States Coast and Geodetic Survey, resolved to become an artist and went to Europe.

Whistler settled in Paris, where he studied at the Ecole Imperiale et Speciale de Dessin, before entering the Academie Gleyre. He quickly associated himself with avant garde artists, and was influenced by Courbet's realism, as well as the seventeenth century Dutch and Spanish schools. He befriended Henri Fantin-Latour and Alphonse Legros, with whom he founded the Société des Trois. After Whistler's At The Piano (Taft Museum, Cincinnati) was rejected at the Salon of 1859 he moved to London (where the painting was exhibited at the Royal Academy), and began work on a series of etchings. There Whistler was influenced by the Pre-Raphaelites, and he befriended Dante Gabriel Rossetti. He achieved international notoriety when Symphony No. 1, The White Girl (1943.6.2) was rejected at both the Royal Academy and the Salon, but was a major attraction at the famous Salon des Refusés in 1863. Thereafter Courbet's influence waned, and Orientalism--and to a lesser extent classicism--became increasingly pronounced elements in his work. Whistler maintained close ties with France during the London years, and painted at Trouville with Courbet, Daubigny, and Monet in 1865.

In 1866 he went to South America, where he painted seascapes in Valparaiso, Chile. After returning to Europe he commenced work on a series of monumental figure compositions for [ ] called the Six Projects (Freer Gallery of Art, Washington, D.C.), that reflect the influence of the English artist Albert Moore. In 1869 Whistler began to sign his paintings with a butterfly monogram composed of his initials. In 1872 he painted his well-known Arrangement in Grey and Black, No. 1: Portrait of the Artist's Mother (Louvre, Paris), that was later acquired by the French government. During the early 1870s he painted his famous "Nocturne" series, views of the Thames. Whistler's Peacock Room, or Harmony in Blue and Gold (1876-1877, Freer Gallery of Art), done for Leyland, exerted a strong influence on the Aesthetic movement's interior design.

In 1877 the critic John Ruskin denounced Whistler's Nocturne in Black and Gold: The Falling Rocket (ca. 1875, Detroit Institute of Arts) as being tantamount to "flinging a pot of paint in the public's face." The artist successfully sued Ruskin for libel the following year, but was only awarded one farthing in damages. Potential patrons were repelled by the negative publicity surrounding the case, and Whistler declared bankruptcy in 1879. He proceeded to Italy with a commission from the Fine Arts Society to make twelve etchings of Venice. After returning to England in 1880 he painted a wide variety of subjects, continued with his interest in the graphic arts, and promulgated his aesthetic theories in print and in the Ten O'Clock lecture (1885); his polemical The Gentle Art of Making Enemies was published in 1890. In 1886 he was elected president of the Society of British Artists, but despite some successes his revolutionary ideas ran afoul of the conservative members, and he was voted out of office within two years. During the late 1880s and 1890s Whistler achieved recognition as an artist of international stature. His paintings were acquired by public collections, he received awards at exhibitions, and he was elected to such prestigious professional associations as the Royal Academy of Fine Arts, Munich, and the Legion d'Honneur. In 1898 he was elected president of the International Society of Sculptors, Painters and Gravers. He withdrew from an active social life around the time his wife Beatrice Godwin died of cancer in 1896. In 1903, the year of his death, a memorial exhibition was held in Boston; the following year similar retrospectives were held by the International Society in London, and the Ecole des Beaux-Arts in Paris. [http://goo.gl/vsLrzZ]
more >
18