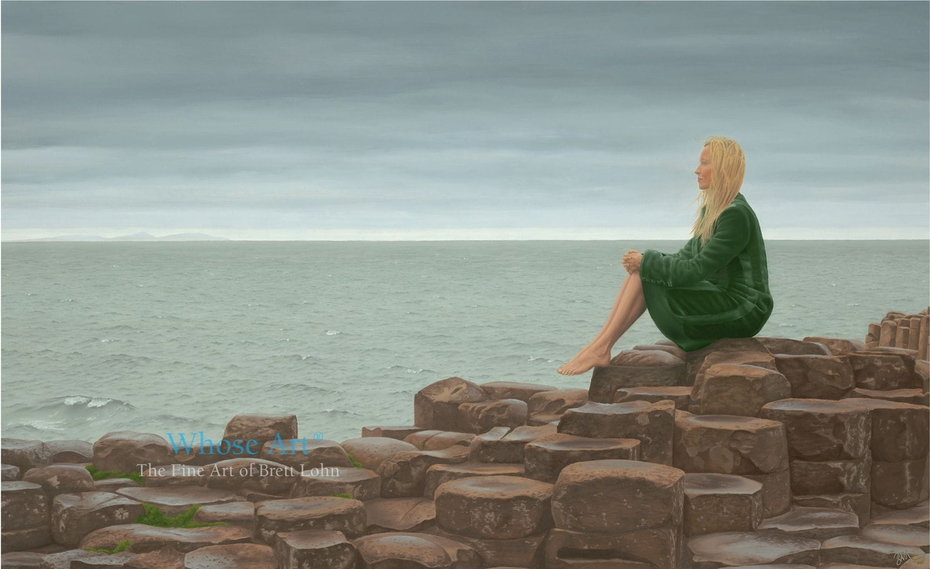 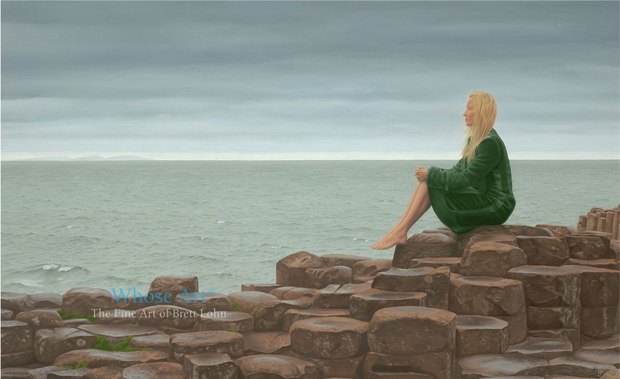 Set on the Giant’s Causeway against the backdrop of a turning Irish Sea, ‘Tuiscint’ heralds the conclusion of the six painting collection which bears its name.

This is the final oil painting in the series of six and measures 24 by 40 inches. Although the weather is inclement, as the wind whips the salt spray off the sea, there is a presiding calmness to this painting. There is no evidence of the sun trying to break fitfully through the cloud, as in earlier works. However on the horizon a band of light hints that perhaps the weather is about to clear more permanently.

The figure, solitary once more, sits on the Giant’s Causeway with calm authority, her damp hair sweet with the rain. To the left of the foreground, on the rock, tufts of green vegetation take shelter from the Irish Sea. This piece of art speaks of reflection.

It is worth noting that this painting exhibits a reverse of several of the themes observed earlier in the series. The figure is now facing back towards the events that have already taken place, in the opposite direction to her gaze in the first painting, ‘The Watchkeeper’. It is almost as if the first and last paintings in the series stand like two book ends supporting the content within.

Her hands are now firmly locked together over her knees, fingers interlaced. Where once she took the man’s hand, she is now clasping her own. Where the tip of her toe pointed to the rock in ‘Lest you strike your foot’, it is now unhindered. The Giant’s Causeway is under her heel.

Again we see the woman’s golden hair interrupt the horizon like a solitary flair. This is perhaps a final, lasting indication of her role in the assistance of the man in his plight.

It is important that people who take the time to look at a painting do not have their imagination restricted by the views of others. If a piece of art offers meaning to the viewer they should embrace it. I am delighted that you’ve taken the time to read this far down the page. Thank you!

Tuiscint is a word taken from the Irish language. It means 'understanding'.


The artist has produced a series of art time-lapse films showing the production of several of his art pieces from start to finish. They can be seen on Brett Lohn's YouTube channel, along with other videos of his work.

Size:
24 x 40 inches
Medium:
Oil on Canvas
License:
All rights reserved. Exhibited on USEUM with the permission of the rights owner.
For more:
https://whose-art.com/pages/giants-causeway-painting