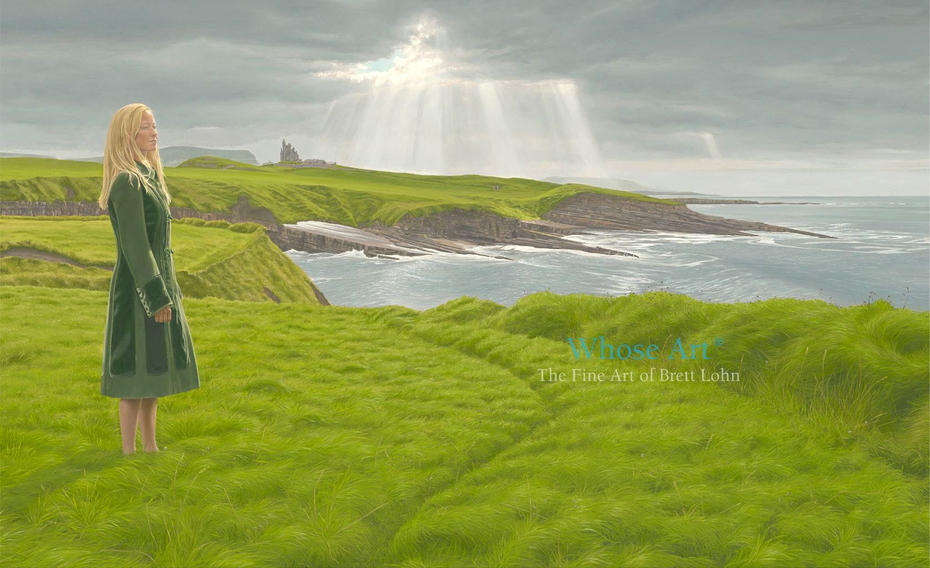 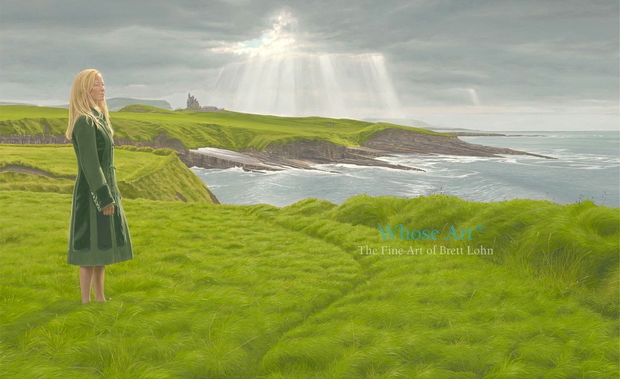 This first painting in the ‘Tuiscint’ series takes us to the West Coast of Ireland. Silhouetted beneath a granite sky we see a lone figure, her face turned from the sun’s longing grasp, gaze set towards the Atlantic.

Measuring 24 by 44 inches this oil painting presented a number of challenges for Brett, not least actually being able to set up his easel in an area famed for it’s tidal activity, with winds to match, the next landfall being America.

Although striking, the sky is far from unusual for this part of Ireland. Behind the figure’s head we see the silhouette of Ben Bulben, part of the Dartry Mountains, dominant over this area of Co Sligo. On the horizon ClassieBawn Castle, with so many memories, clings to the Head, as hopeful shards of sunlight skirt nearby.

The rich green colour of the grassy Head is exaggerated by its contrast to the slate grey sky. All the while, though threatened by the upset of an Atlantic storm, the sun’s warmth persists in softening the landscape, bringing the female figure into sharp relief. The burnished lustre of her hair frames a purposeful, surveying stare. She is not searching, she is watching.

Our eye is led into this painting by the path skirting the edge of the grassy headland. We are then encouraged across the crest of glistening water that meets the path’s edge, and on towards the sunlight, as it splits the sky’s burdened underbelly.

We are led beyond the figure as if she is aware every bit as much of us, as we of her. She is unperturbed by all that is going on around her now and all that has taken place in the recent past. As this series of paintings unfolds we begin to understand more clearly where her gaze has settled and by Whom her name has been called.

Size:
24 x 44 inches
Medium:
Oil on Canvas
License:
All rights reserved. Exhibited on USEUM with the permission of the rights owner.
For more:
https://whose-art.com/pages/mystical-painting