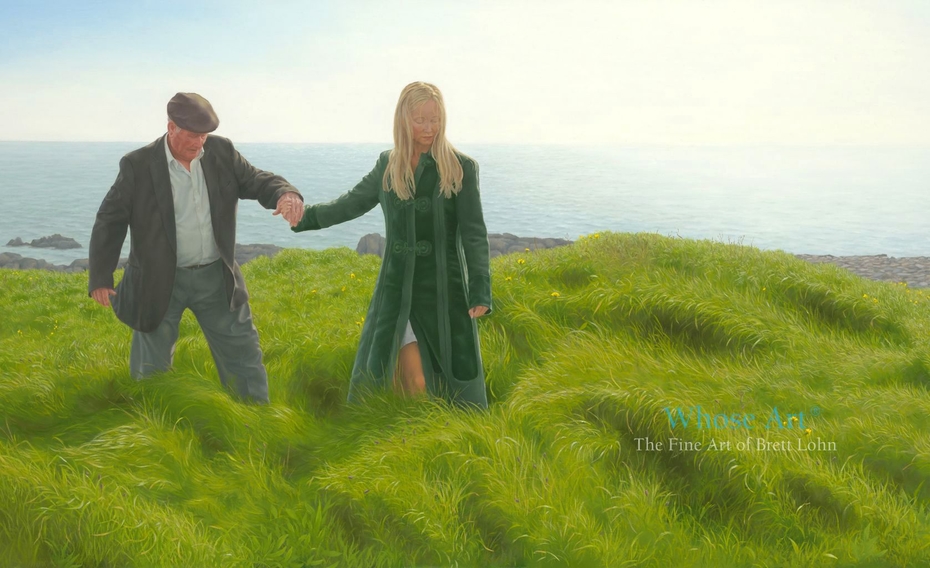 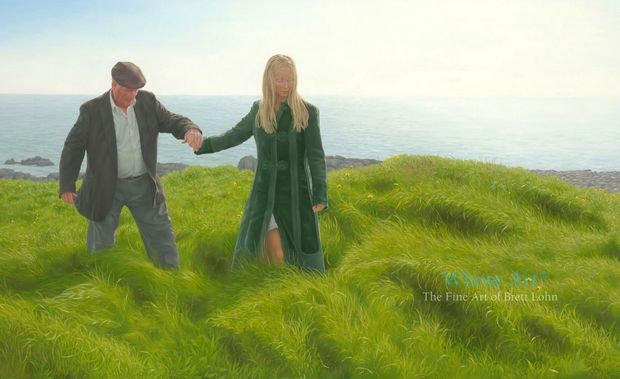 At 20 by 38 inches this is the smallest oil painting in the ‘Tuiscint’ series and also the most simple in composition. The shape of the canvas is unusual for such a painting, lending it an elongated, horizontal span. The viewer is left feeling almost as if we are spying on the two figures through a restricted opening.

The canvas is divided roughly into two halves. On the left we see the figures walking together. Though their hands are joined, one is definitely being led. Where the female was previously holding a stone, she now gently guides the man through an undulating grassy swell that replicates the motion of an enthusiastic tide.

The sun dominates the right hand section of this painting, its warmth resting on the backs of the figures’ necks, as for the first time in the ‘Tuiscint’ series we see a cloudless sky.

A calm sea frames the two figures’ hands where they join, helping to create a very definite focal point. We are encouraged to study the hands more closely. Are they really holding each other or has one reached out to be taken by the other? The man’s free hand is clearly empty now but what is concealed within the woman’s closed fist?


The artist has produced a series of art time-lapse films showing the production of several of his art pieces from start to finish. They can be seen on Brett Lohn's YouTube channel, along with other videos of his work.

Size:
20 x 38 inches
Medium:
Oil on Canvas
License:
All rights reserved. Exhibited on USEUM with the permission of the rights owner.
For more:
https://whose-art.com/pages/mental-health-art