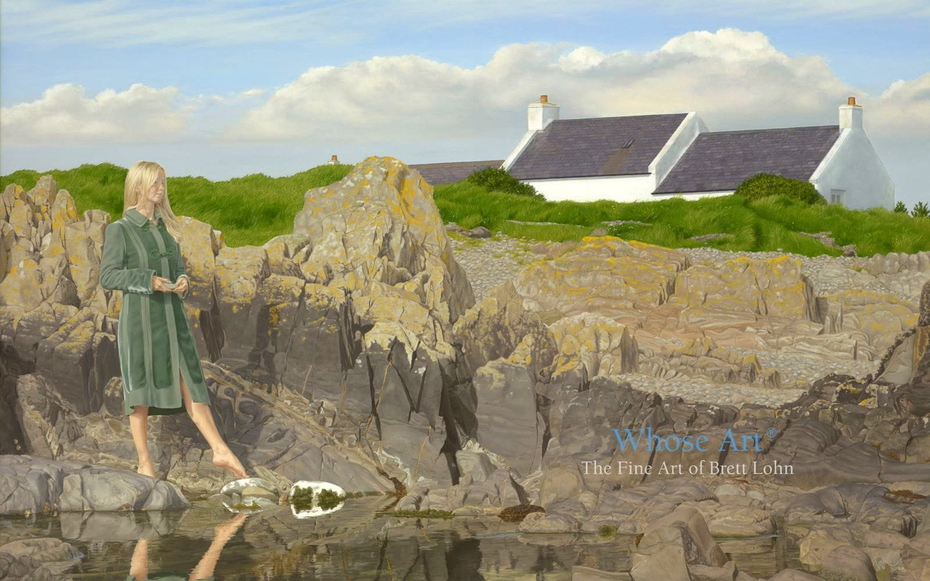 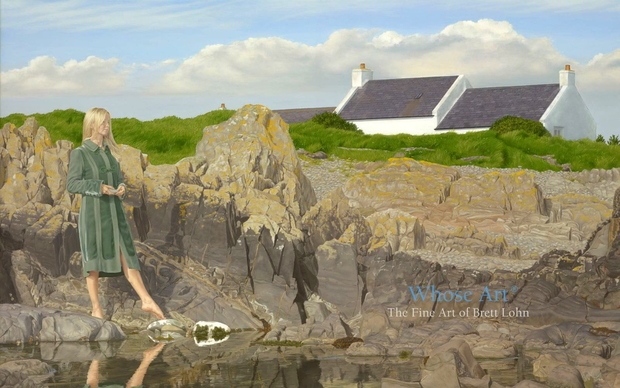 Lest You Strike Your Foot

Brett rates this 24 by 38 inch oil painting among the most gruelling and technically challenging pieces of art that he has produced. A tremendous amount of concentration is required to render rocks on canvas in Brett’s style of ‘painting what the eye feels’. Many months spent standing for hours on end at an easel working in such detail, whether on the beach or in his studio, can be physically demanding.

The composition of this painting is unusual in that we, the viewer, are at eye level with the figure’s pointing foot. The shape of her leg is repeated several times in the rocky formation behind her. On each occasion the echoed angle becomes more obtuse until finally, in the grassy band that spans the horizon, it runs parallel with the sky.

Where the right side of the figure was hidden from the sun in ‘The Watchkeeper’ we now see her bathed in light. Her hands, carefully holding a stone, replicate those of the man in ‘The Dusk House’. However her burden is much lighter, almost one of empathy for his, as if she has perhaps prepared a replacement for him.

The title of this oil painting, coupled with the fact that we are at eye level with the woman’s foot, should draw our focus to where she is pointing. There are in fact two legs leading us to the stone upon which her foot rests, one of them a reflection in the rock pool. It is this same bright reflection that eases us into the painting and dictates the path of our eye. So what is the significance of this stone? Or is the relevance the fact that she is on top of it, in a position of complete authority?

Size:
24 x 38 inches
Medium:
Oil on Canvas
License:
All rights reserved. Exhibited on USEUM with the permission of the rights owner.
For more:
https://whose-art.com/pages/mysticism-art