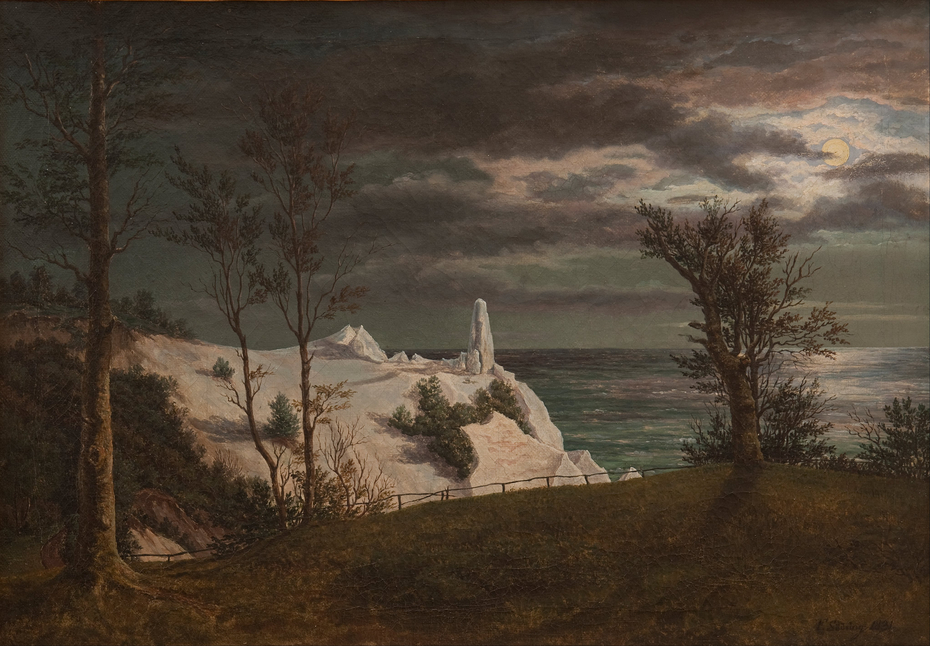 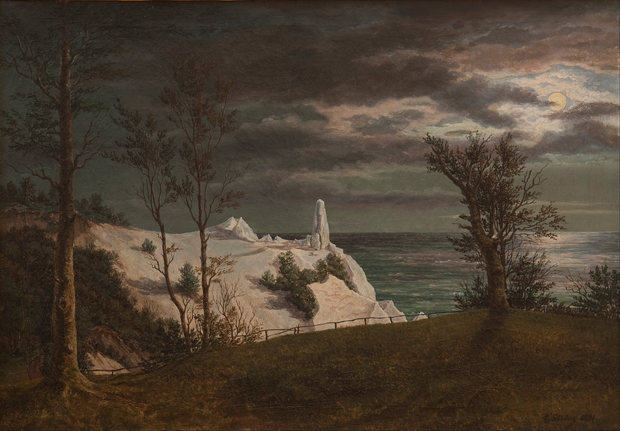 The "Summer Spire" on the Chalk Cliffs of the Island Møn. Moonlight

1831
Sødring was among the few Danish artists of this period to look to Romantic landscape painting for inspiration, and this painting is radically different from the majority of paintings created in Denmark around 1830.
Frederik Sødring’s painting of the Summer Spire on the Cliffs of Møn differs greatly from the general feel of most paintings created in Denmark around 1830, first and foremost because it is a nocturnal scene, but also because of the way in which the motif has been treated. The artist has chosen to view the Summer Spire against a dramatic night sky where the moon breaks through the clouds and makes the chalk cliffs appear luminously white against the dark surroundings.

Sødring was among the very small number of Danish artists who looked towards the Dresden school of Romantic landscape painting from the very outset. The art of J. C. Dahl was particularly important to him; for his debut at Charlottenborg in 1828 Sødring presented two copies after Dahl, and in the years that followed the Norwegian painter’s views on art and artistic principles came to be of crucial importance to Sødring’s own work. However, some of his paintings show that he must also, at an early stage, have become interested in the German landscape painter Caspar David Friedrich’s work and artistic devices. Several features of the Summer Spire scene are very reminiscent of the German artist (the moonlight breaking through the clouds, reflected on the sea; and the tree silhouetted against the sky). However, none of the Friedrich paintings that Sødring is known to have had the opportunity to see before 1831 are obvious role models, so in all likelihood Friedrich’s impact has been mediated through Dahl’s moonlit scenes.

The museum also provides interactive material and videos about this artwork.

License:
Courtesy of the National Gallery of Denmark
For more:
http://collection.smk.dk/#/en/detail/KMS7240