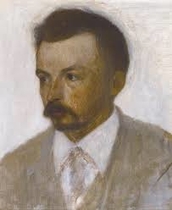 Danish painter, elder brother of the painter Svend Hammershøi.
Born in Copenhagen. Studied under N.C. Kierkegaard, Fr. Rhode and Vilh. Kyhn; from 1879 at the Copenhagen Academy under Vermehren; from 1884 at the art school run by P.S. Krøyer.
Helped to found the group Den Frie in 1891, after several of his works had been rejected by the jury of the Academy.
Lived and worked mainly in the old quarter of Copenhagen, and painted portraits, landscapes, architectural subjects and, from the later 1890s, above all Vermeer-like interiors, usually with a single figure standing or seated.
His work is noted for its quietness, austere simplicity, and tonal studies of light and shade; some affinity with Whistler and Carrière.
Painted two murals of architectural subjects for Copenhagen Town Hall.
Died in Copenhagen.