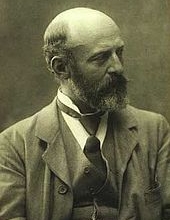 Viggo Johansen (1851-1935) grew up in a villa at Gl. Kongevej in Copenhagen. At the age of 17, he began his studies at the Royal Danish Academy of Fine Arts where he was regarded as highly talented. He was therefore given training in figure painting, which at the time was considered the finest branch of painting. However, he never managed to graduate, a fate which he shared with several other famous artists, including Michael Ancher.

In the 1880's, Viggo Johansen spent his summers in Skagen together with Martha and a rapidly growing flock of children. The family rented Madam Bendsen's house in Skagen's West Town, and while they lived there, Viggo Johansen made several fine landscape paintings from Skagen. Apart from landscapes, the family was his favourite motif.