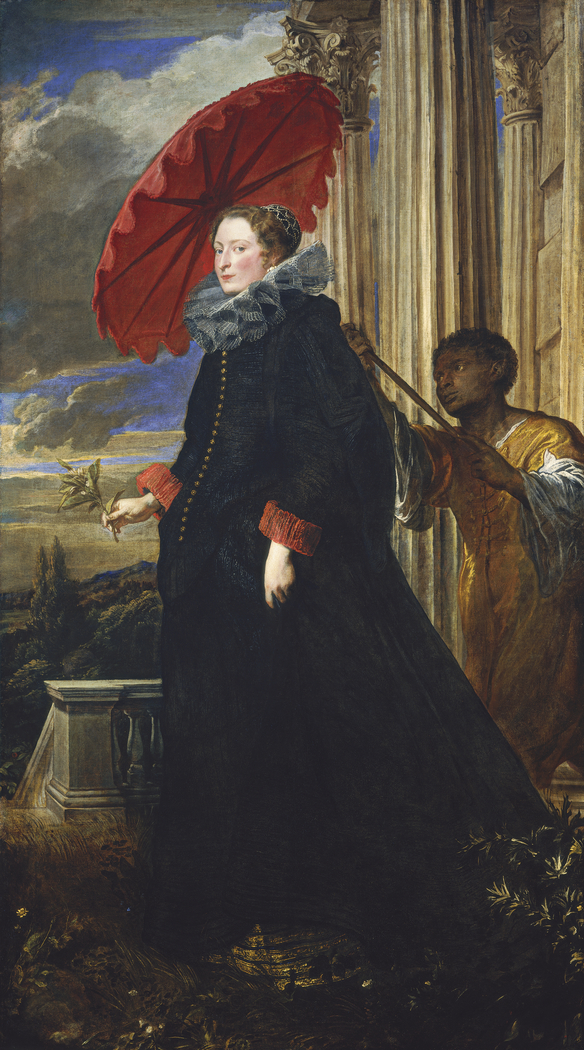 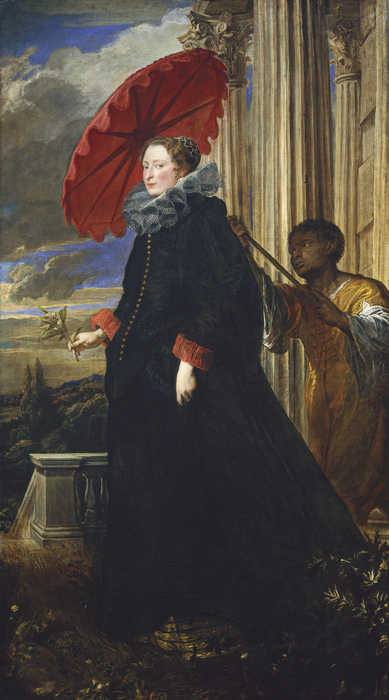 1623
Here he had numerous opportunities to paint portraits in which he was marvelously successful and had few equals. He painted Cavaliers and Ladies of our city and all of them so lifelike and invested with a certain air, that . . . . one could sense the spirit of their nobility.

The resplendent Marchesa Cattaneo strides onto the terrace of her Genoese palazzo while her African servant shields her with a bright red parasol. Her steady gaze and proud bearing tell us that she is a confident woman. Anthony van Dyck had a remarkable ability to understand his patrons' aspirations and to express them in his portraits, whether it be the inner strength of a Flemish burgher, the dashing bravura of a military hero, the innocence of a young girl, or the grace of an aristocrat such as Elena Grimaldi Cattaneo. Partly because of the extraordinary surety of his brushwork and the fluidity of his forms, Van Dyck convinces the viewer that his characterizations are just. In truth, however, one knows little or nothing about the personalities or ambitions of most of his sitters, particularly those he portrayed in Genoa. Nevertheless, this portrait's details and composition assure us of the sophistication of this altera donna, or grand lady. The Marchesa's exceptional and disproportionate height emphasizes her stature, literally and figuratively. The red sunshade emphasizes the viewer's position beneath hers and extends her presence, forming a halo around her head against a dramatic sky. The red cuffs break up the severity of the Marchesa's lavish, black costume and draw attention to her hands—especially to the sprig of orange blossoms in her right hand, a traditional symbol of chastity.

Without knowing his actual state of servitude, the black attendant holding the marchesa's parasol is a reminder of the active slave trade from Africa to Genoa. His inclusion in the portrait may derive artistically from Titian, the Italian Renaissance artist Van Dyck admired and who portrayed black servants in several of his canvases.

In the same year he created this portrait, Van Dyck also painted the marchesa's two eldest children, Filippo (1619–1684) and Maddalena Cattaneo (born in 1621), both the National Gallery of Art collection (1942.9.93, 1942.9.94). An Englishman visiting the Palazzo Cattaneo in December 1827 saw the three portraits hung as a group, with the children flanking their mother. P. A. B. Widener's purchase of all three portraits in 1908 allows the museum to replicate that arrangement today.

Van Dyck studied and worked in Italy from late 1621 until 1627. While the port of Genoa was his base, he also made numerous trips of varying duration to other Italian cities, including an eight-month stay in Rome in 1622. In Genoa, he encountered the majestic portraits Peter Paul Rubens had painted there in 1606, including Marchesa Brigida Spinola Doria (NGA 1961.9.60), a grand work that inspired this portrayal of Marchesa Cattaneo. The marchesa's parasol and the architectural setting, with its delicately carved Corinthian columns, are directly related to Rubens's use of imposing architecture, terrace setting, red drapery, and overall sense of grandeur in the Spinola Doria portrait. Read more... (Source: National Gallery of Art)


Notes from the Contributor:
This stern-looking and well-dressed woman is the Genoese Marchesa Elena Grimaldi Cattaneo.
More information 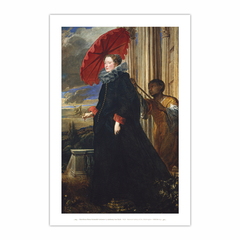 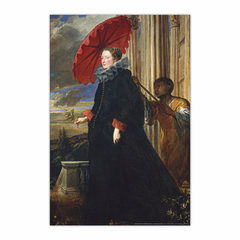