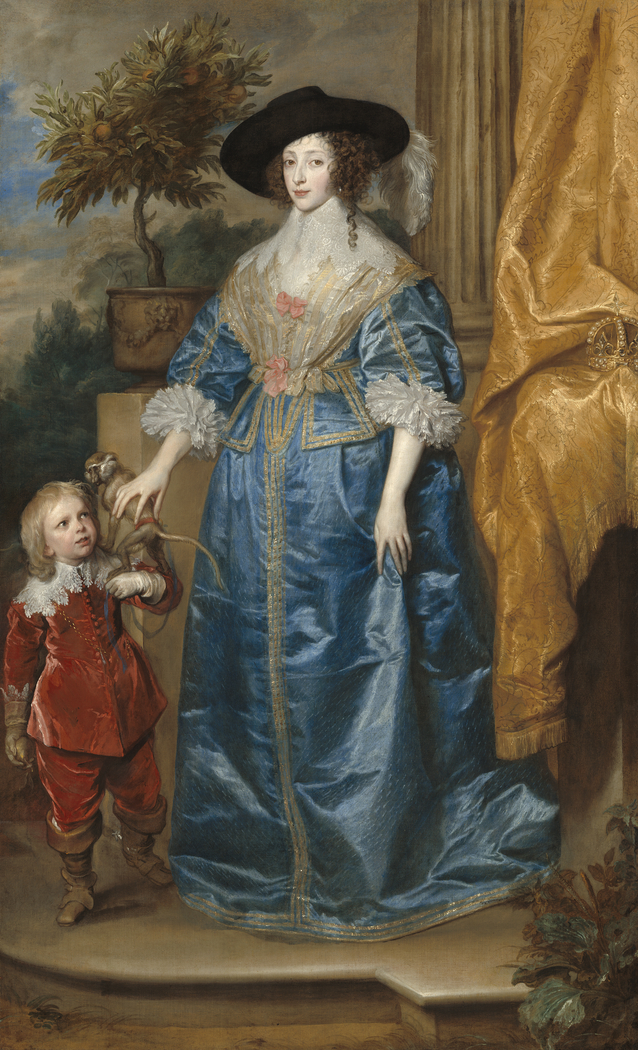 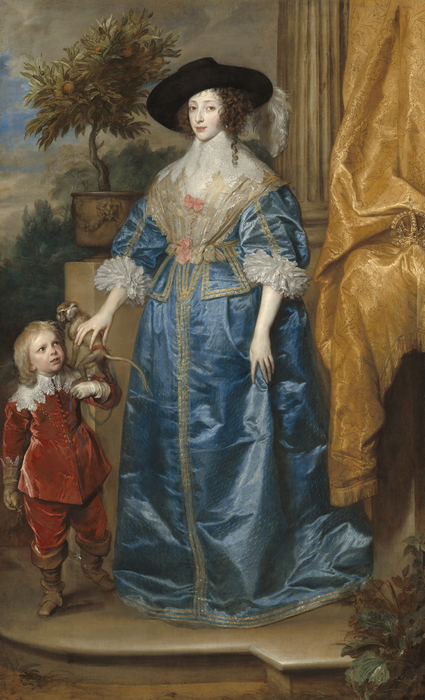 1633
In 1632 Anthony van Dyck was invited to England to work at the court of King Charles I and Queen Henrietta Maria. In Van Dyck, the royal couple and the English aristocracy found an artist whose gifts perfectly matched their artistic sensitivities as well as their political needs and aspirations. Van Dyck infused his portraits of the king and queen, including this depiction of Queen Henrietta Maria at age 24, with a tenderness and warmth of expression that fully convey the ideals of peace and harmony that underlay their philosophy of divine right to rule. Charles I not only commissioned Van Dyck to paint portraits for his own collection but also as gifts for loyal courtiers, ambassadors, and foreign rulers. This magnificent portrait of the Queen is the type of painting that the king would traditionally present to a court favorite for political purposes.

Henrietta Maria, daughter of King Henri IV of France and sister of King Louis XIII, exerted a strong influence on court fashion and protocol, and introduced continental fashions and Italianate gardens to England. Van Dyck portrayed her dressed for the hunt in a brilliant blue satin riding costume with a delicate lace collar instead of the stiff and formal Elizabethan ruff still widely in use. Whereas the queen's graceful pose and demure expression are at once regal and endearing, her stylish wide-brim feathered black hat and shimmering dress create a sense of vibrancy and vitality.

The queen's love of entertainment is symbolized by the presence of 14-year-old Sir Jeffrey Hudson and Pug the monkey, both royal favorites. Hudson, a perfectly proportioned dwarf whose services had been offered to the queen as a young boy, possessed a ready wit, and became one of the Queen's trusted advisors, even joining her in exile in France in the early years of the English Civil Wars (1642–1651).

This portrait superbly demonstrates Van Dyck's working methods and the reasons for his phenomenal success. Even though the portrait shows a tall woman with an oval face, pointed chin, and long nose, the queen was reportedly petite, with a round head and delicate features. Van Dyck greatly idealized her in the portrait—and this artistic flattery must have pleased her. To further accentuate her status Van Dyck revisited a compositional idea he first developed in Genoa during the early 1620s with his portrait of Marchesa Elena Grimaldi Cattaneo (NGA 1942.9.92): he has portrayed the queen standing just beyond the portico of an imposing architectural structure. The fluted column emphasizes her already exaggerated height, and the crown and cloth of gold emphasize her royalty. In preparation for the portrait, Van Dyck must have done a careful study of Henrietta Maria's head, but as she probably posed only briefly for a sketch of the overall composition, he likely painted the actual portrait from a model or mannequin dressed in the queen's costume.

The orange tree behind Henrietta Maria, who was named after both her father, Henri IV of France, and her mother, Maria de' Medici, pays visual homage to her powerful Florentine ancestors. The Medici crest contains five gold balls, thought to represent oranges from the family's renowned citrus tree collection. A symbol of purity, chastity, and generosity, the orange tree was also associated with the Virgin Mary, Henrietta Maria's patron saint.

Note by the contributor, Emily Wilkinson:
This portrait depicts Queen Henrietta Maria, the French wife of King Charles I of Britain. As an aesthete the Queen, like her husband, appreciated material beauty and fashion, and this much is demonstrated here by her opulent blue dress. Jeffrey Hudson was the Queen's 'court dwarf'.