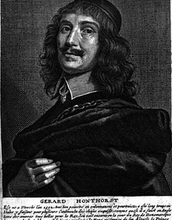 Gerard van Honthorst (1590-1656)
Born in Utrecht, Gerard van Honthorst came from an artistic family. Gerard, also known as Gerrit, was its most successful member. Following a stay in Italy in the 1610s, he returned to Utrecht in 1620. He was a prominent representative of a group of painters that have become known as the Utrecht Caravaggists, Dutch followers of the Italian artist Caravaggio. The latter was especially known for his nocturnal scenes of candlelit figures. In the 1630s, Van Honthorst acquired a name in court circles as a portrait painter, which led him to move to The Hague in 1637. In 1649, Van Honthorst was commissioned to paint part of the decoration of the Orange hall at the stadholder's palace of Huis ten Bosch. In 1652, he returned to Utrecht, where he died four years later.
more >
12