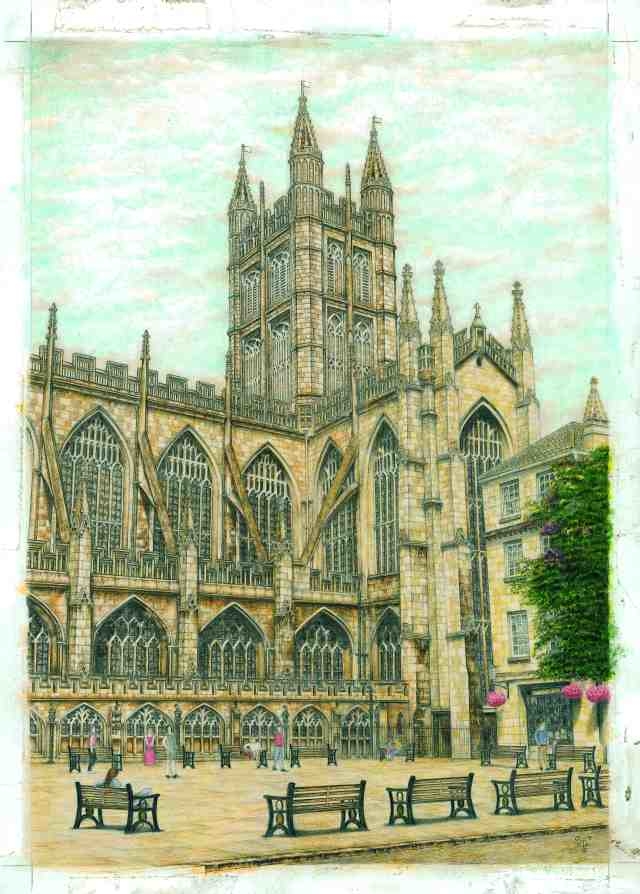 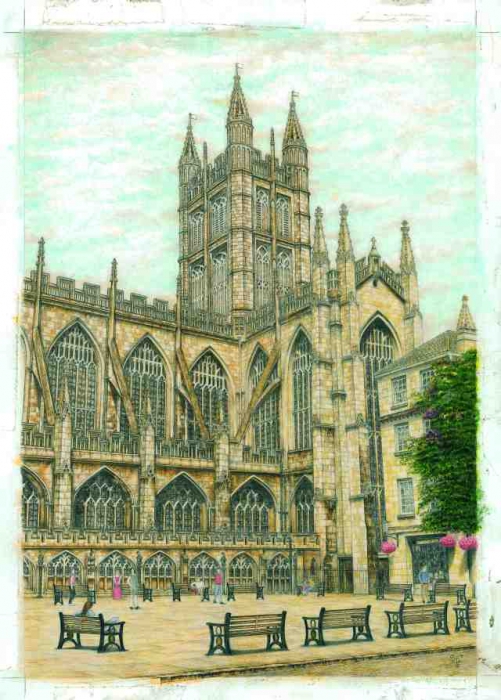 Bath Abbey’s history dates back to the year 757, where documents mention a monastery of St Peter in Bath.

In the year 1090 Bishop John de Villula transferred his seat from Wells to Bath and demolishes its Saxon Abbey. A Norman Cathedral replaced this; which doubled as a church to the original monastery.

King Henry VIII dissolves the old monastery in 1539 as part of the dissolution of the monasteries.

It was not until Queen Elizabeth I promoted the restoration of the ruined abbey in 1574 that we can appreciate the skilled craftsmanship and beauty of this magnificent building.

The abbey was completed in 1611 and its function as a parish church could commence.

The southwest elevation of the abbey depicted in Matthew's painting shows the improvements to the abbey suggested originally by Bishop Law in 1825.

George Manners continued the improvements by adding the flying buttresses and buttress pinnacles, giving the architecture a more harmonising appearance and balance.

The abbey church measures 220 feet in length and 72 feet in width, the height of the knave is 79 feet and the central tower rises to 161 feet.

Bath abbey is the most popular parish church in the country, owing to its magnificent gothic styled interiors, splendid stained glass windows, (which occupy 80% of the buildings wall space) and its charming chapels including the very impressive Chantry Chapel of Prior William Birde.

Its ever-increasing popularity is sustained by the upkeep of this beautiful building and the recent exterior wall cleaning reflects the overall ambience of Bath's largest church.

License:
All rights reserved. Exhibited on USEUM with the permission of the rights owner.
For more:
http://www.thecityofbath.co.uk/charter_trustees.htm