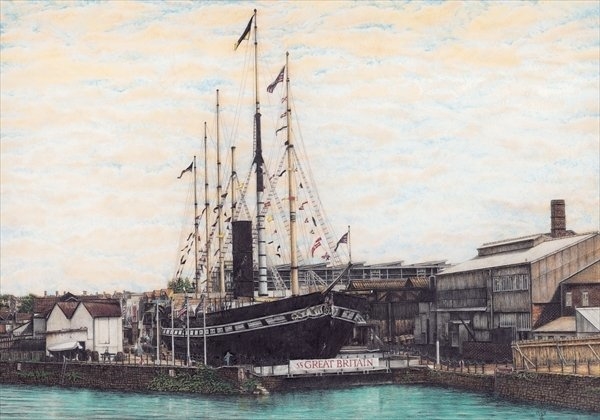 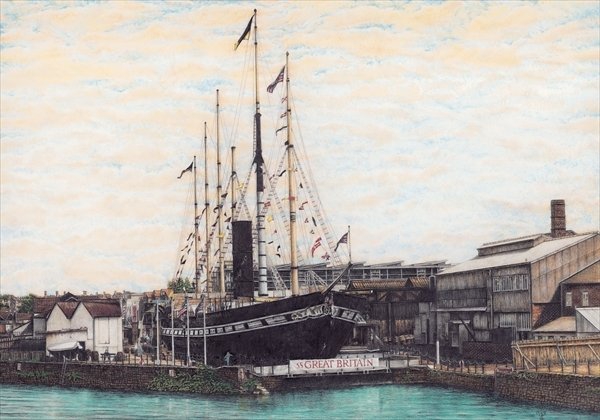 2008
The No.1 Artist's Proof was presented to the
Lord Mayor of Bristol, Councillor Christopher Davies at the Mansion House, Clifton, Bristol 8, on Monday 23rd of February 2009. The proof was donated by Matthew and is now on display as part of the Mansion House's permanent collection

She was launched in Bristol on the 19th of July 1843 by Prince Albert and was called "the greatest experiment since the creation".
At this time, her iron hull made her the largest and strongest ship ever built.
The most powerful maritime engine producing 1,000 horsepower was installed.

Thomas Guppy working closely with Brunel on an idea developed by Brunel’s father designed it.
During her service at sea, the ss Great Britain sailed around the world thirty two times (exceeding 1,000,000 nautical miles at sea).
The ship's first Atlantic crossing from Liverpool to New York was in 1845 where she arrived with a rapturous reception.
The crossing took fourteen days and twenty one hours.
In 1850 The Great Western Steamship Company sold the ss Great Britain to Gibbs, Bright & Co.

Two years later on the 21 st of August, she sailed from Liverpool to Melbourne, Australia carrying six hundred and thirty passengers - a voyage that took sixty days.

On one of her many voyages she carried the first England cricket team to play Australia and the team included Dr E.M. Grace (Dr W.G. Graces' brother) and H.H. Stepbenson.

Gibbs, Bright & Co made several alterations to Brunel's ship to adapt her for sailing to Australia.

These included replacing the original rudder, propeller and engine and they also added a second funnel (removed in 1857).

An addition of another upper deck enabled her to carry up to seven hundred passengers.

After the first thirty years of the ship's service as a passenger ship, she was converted to transport cargo.

In 1882 the engine was removed as well as her funnel, to allow for increased space for stowing cargo.

With the removal of her engine she was dramatically cheaper to run.

Relying on three tall masts and her broad square sails, the ss Great Britain had become known as a 'Windjammer.

On the 13th April 1970 Ewan Corlett, a naval architect, helped organise the rescue operation, which would return the ss Great Britain back to her birthplace.

She was transported on a giant floating pontoon named Mullus 11 and taken by tugboats across the Atlantic travelling eight thousand miles home to Bristol's Great Western Dockyard.

From that all-important day, which saw the ss Great Britain return to Bristol to the present day, she has undergone complete restoration and vital conservation work to restore her to the beautiful and awe-inspiring Victorian passenger liner she was on the day of her launch.

Over 170,000 people visit the ss Great Britain annually and the Trust, established in 1970, receives no central or government support, relying on admission ticket sales, venue hire, weddings and civil partnerships and donations for income.

The artwork is featured at the World Child Cancer charity exhibition

License:
All rights reserved. Exhibited on USEUM with the permission of the rights owner.
For more:
http://www.magnoliabox.com/art/250725/Study_of_SS_Great_Bri…

$200
Size of Edition: 70
Buy Limited Edition Print
30% of your purchase goes to:World Child Cancer
Send it as
an e-card