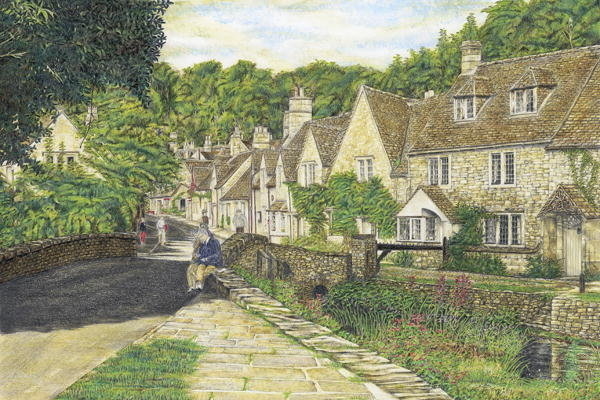 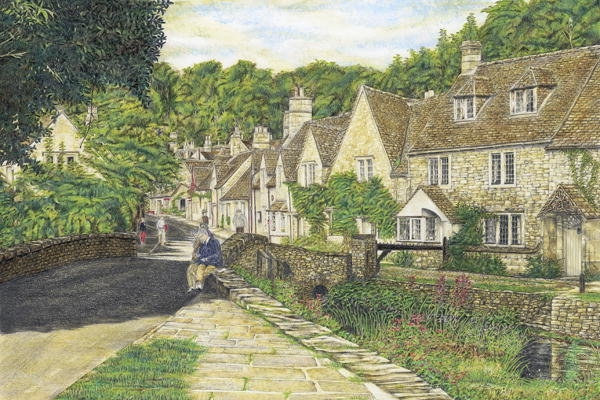 2001
Known to many as "The Prettiest Village in England" This classic scene of Castle Combe village is the most popular view of this beautiful and untouched Cotswold village.

Matthew has only given artistic licence by removing the parking posts ( that were seated along the grass verge in foreground) and the rooftop aerials.

Critics and Patrons alike have commented that the painting is almost identical to the film set of the 2001 "Dr. Dolittle 2" film, which was coincidentally released in the same year that Matthew painted this work.

This is maybe because the original 1967 Rex Harrison film was filmed on location in Castle Coombe. At least another eight films have been filled at Castle Combe (Link).

The picture has been painted with as much accuracy as possible including the various figures and the botanical features in the stream.

The painting took approximately 250 hours to complete and was given as a wedding present to a close friend where it is now held in a private collection.

All the 250 prints were sold out within six months of being offered for sale which confirms that the village of Castle Coombe is and always will be a highly desirable part of the Cotswolds in the hearts and thoughts of many.

License:
All rights reserved. Exhibited on USEUM with the permission of the rights owner.
For more:
http://www.magnoliabox.com/artist/12944/Matthew_Grayson