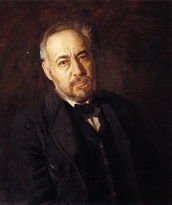 Thomas Cowperthwait Eakins (July 25, 1844 – June 25, 1916) was an American realist painter, photographer, sculptor, and fine arts educator. He is widely acknowledged to be one of the most important artists in American art history.

For the length of his professional career, from the early 1870s until his health began to fail some 40 years later, Eakins worked exactingly from life, choosing as his subject the people of his hometown of Philadelphia. He painted several hundred portraits, usually of friends, family members, or prominent people in the arts, sciences, medicine, and clergy. Taken en masse, the portraits offer an overview of the intellectual life of Philadelphia in the late 19th and early 20th centuries; individually, they are incisive depictions of thinking persons.

In addition, Eakins produced a number of large paintings which brought the portrait out of the drawing room and into the offices, streets, parks, rivers, arenas, and surgical amphitheaters of his city. These active outdoor venues allowed him to paint the subject which most inspired him: the nude or lightly clad figure in motion. In the process he could model the forms of the body in full sunlight, and create images of deep space utilizing his studies in perspective. Eakins also took a keen interest in the new technologies of motion photography, a field in which he is now seen as an innovator.

No less important in Eakins' life was his work as a teacher. As an instructor he was a highly influential presence in American art. The difficulties which beset him as an artist seeking to paint the portrait and figure realistically were paralleled and even amplified in his career as an educator, where behavioral and sexual scandals truncated his success and damaged his reputation.

Eakins was a controversial figure whose work received little by way of official recognition during his lifetime. Since his death, he has been celebrated by American art historians as "the strongest, most profound realist in nineteenth- and early-twentieth-century American art". [Source]
more >
10