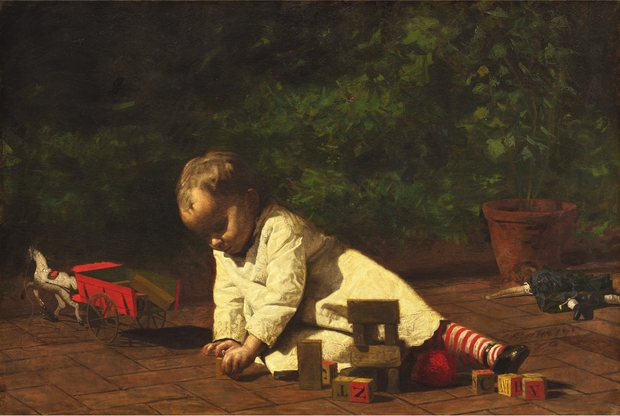 1876
Baby at Play is the final work in a series of intimate portraits of family and friends created by Eakins between 1870 and 1876. The painting depicts the artist's two–and–a–half–year–old niece, Ella Crowell. Dressed in an intricately embroidered white frock, her legs clad in red–and–white striped stockings, the child is soberly absorbed at play.

According to one recent interpretation, Eakins was depicting Ella's initial foray into the adult world of education and learning. Having temporarily cast aside her more infantile toys in favor of alphabet blocks—the tools of language—the child now seems ready to enter the next critical stage in her intellectual development.

The monumentality of her painted form may seem surprising, considering the diminutive stature of Eakins' model. Her life–sized figure is arranged in a stable pyramidal block at the composition's center and the deft handling of light and shadow further emphasizes spatial volume. Eakins' choice of a lowered vantage point encourages the spectator to adopt a child's point of view. His penetrating psychological insight elevates this picture from a sentimental genre scene to a highly serious portrayal of an earnest, intelligent child.