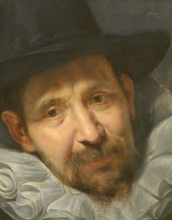 A flower painter and landscape artist, Jan Brueghel the Elder (b. 1568, Brussels, Belgium - d. 1625 Antwerp, Belgium) worked from nature. Bringing home the flora he depicted in his tightly composed still lifes, he often went great distances to find rare examples. When flowering plants had run their course around August, landscape season began. Called "Velvet Brueghel" for his skill at painting rich and delicate textures, Brueghel was the second generation in a dynasty of Flemish painters. Born in Brussels and trained by his grandmother, Brueghel was celebrated in his own time, becoming dean of the Antwerp painters' guild by 1602. He traveled widely throughout Europe. During a three-year trip to Italy in the mid-1590s, he gained the patronage of Cardinal Federigo Borromeo, who delighted in Brueghel's unrealistic spaces and unexpected vistas combined with flowers and animals depicted from life.

Brueghel mixed the past--artificial, jam-packed Mannerist compositions--with a modern insistence on observation from nature. He frequently provided lush, warm-toned woodland scenes densely populated with exotic animals and flowers as frames for other artists' figures. His best-known collaborator was his friend Peter Paul Rubens. Brueghel's sons, including Jan Brueghel the Younger, and later artists carried on his style well into the 1700s.