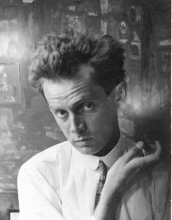 Egon Schiele (b. June 12, 1890- d.October 31, 1918) was an Austrian painter. A protégé of Gustav Klimt, Schiele was a major figurative painter of the early 20th century.
As a child, Schiele was fascinated by trains, his father worked for the Austrian State Railways, and Egon would spend many hours drawing them, to the point where his father felt obliged to destroy his sketchbooks. When he was 11 years old, Schiele moved to the nearby city of Krems (and later to Klosterneuburg) to attend secondary school. To those around him, Schiele was regarded as a strange child. Shy and reserved, he did poorly at school except in athletics and drawing, and was usually in classes made up of younger pupils.
Schiele's family environment was not particularly encouraging for a fledgling painter but when Egon Schiele was 15 years old, his father died from syphilis, and he came under the protection of his maternal uncle, Leopold. Leopold became distressed by Schiele's lack of interest in academic studies, yet recognized his passion and talent for art and allowed him a tutor.
In 1906 Schiele applied at Kunstgewerbeschule (the School of Arts and Crafts) in Vienna.
In 1907, Schiele sought out Gustav Klimt. Klimt generously mentored younger artists, and he took a particular interest in the gifted young Schiele, buying his drawings, offering to exchange them for some of his own, arranging models for him and introducing him to potential patrons. He also introduced Schiele to the Wiener Werkstätte, the arts and crafts workshop connected with the Secession. In 1908 Schiele had his first exhibition, in Klosterneuburg. By early 1910, Schiele appeared well on the way to establishing himself professionally. Not yet twenty years old, he had already developed his own distinctive Expressionist style. Sadly, he died young, aged 28, by the Spanish flu pandemic.
more >
53