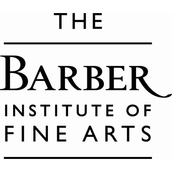 The Barber Institute of Fine Arts is housed in one of Birmingham’s finest Art Deco buildings, purpose built and opened by Queen Mary in 1939.
The Barber Institute was designed by Robert Atkinson (1883-1952), one of Britain’s leading architects of the 1920s and ’30s. When it opened The Times described the building as ‘the purest example of his work’ and it continues to be regarded as one of his greatest achievements.
In 1946 the building received a bronze medal from the Royal Institute of British Architects and in 1981 was listed Grade II by the Department of the Environment.
The design of the building came as a result of a close collaboration between Atkinson and the Barber’s first Director, Professor Thomas Bodkin, and was influenced by new galleries built at the Fitzwilliam Museum, Cambridge, the Boijmans Museum, Rotterdam and the Gemeentemuseum at the Hague.
The building is laid out around the central music auditorium, surrounded by corridors. On the Ground floor these form offices and lecture halls for the Departments of Music and History of Art, as well as a dedicated Art History library. The galleries occupy the same space on the first floor, approached by a magnificent travertine staircase directly opposite the entrance.
Atkinson had originally planned for the addition of a courtyard and a substantial extension, but in 1965, the building of the Music Library changed these designs. In 1974 the Reserve Gallery was built on top of the Music Library to house works of art not currently on display, and finally between 1986-89, the metal and glass roof was added, along with a top-lit picture gallery.
Atkinson designed two further museum interiors, the Colman Galleries at the Castle Museum in Norwich, which opened in 1951, and the Graham Robertson and Students’ Rooms at the Fitzwilliam Museum in Cambridge, which were completed posthumously in 1955. [source]
more >
3