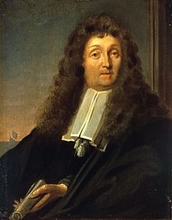 Ludolf Bakhuysen (1630-1708)
Born in Emden in Germany, marine painter and printmaker Ludolf Bakhuysen came to Amsterdam in 1649. There he was taught by landscape artist Allart van Everdingen and marine painter Hendrick Dubbels. His work also reveals the influence of Willem van de Velde I, another nautical specialist. In addition to his views of harbours and portraits of ships, Bakhuysen painted many dramatic scenes of stormy seas and shipwrecks. It was said that he often went to sea when the weather turned bad, to see the effect at first hand. He depicted many episodes from Dutch maritime history. When the Van de Veldes moved to England around 1672, Bakhuysen remained the last great artist working in the genre in Holland.
more >
2