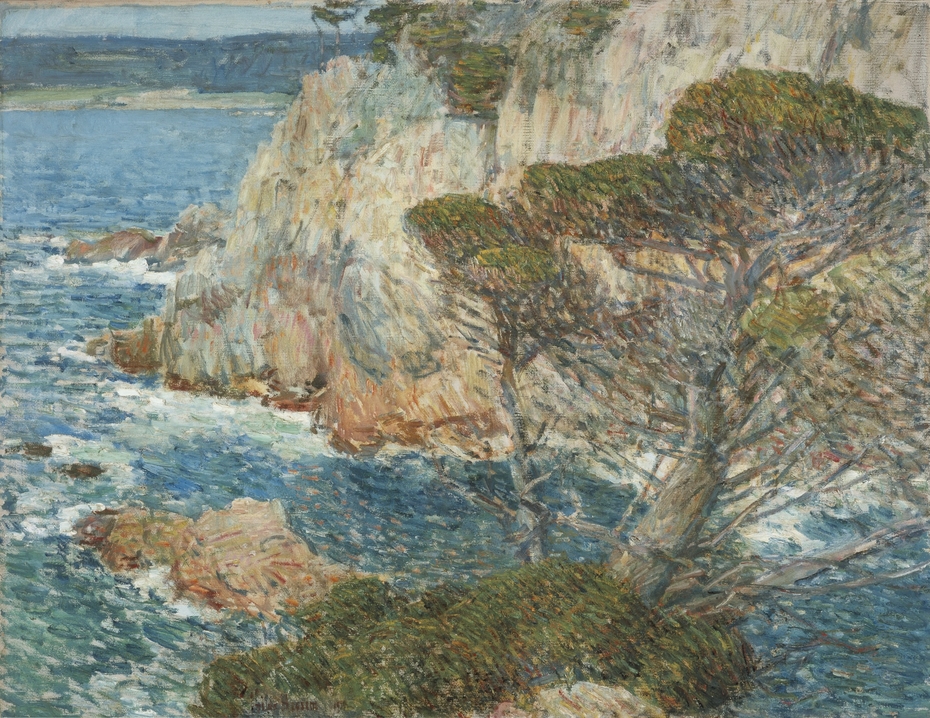 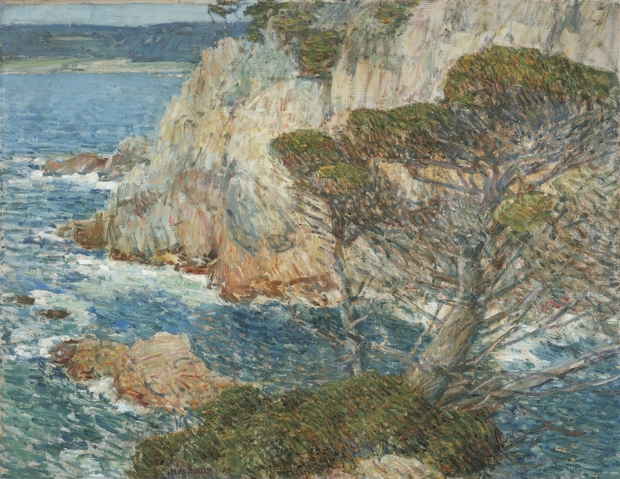 1914
Notes from the Curator:
California scenes by Hassam are not common; references suggest that there may not be more than a dozen. Hassam began traveling to the West Coast in the early years of this century, first to spend time with a patron in Oregon. Later he visited California several times. Hassam definitely visited the San Francisco area in 1914, to complete a lunette mural for the Panama-Pacific International Exposition of 1915. While in San Francisco he stayed at the Bohemian Club but made excursions to the favorite painting spots of local artists in the neighboring areas, among them Carmel. Point Lobos, Carmel was the result of a sketching trip that Hassam took with the California landscape painter Francis J. McComas (1874-1938). McComas’s second wife recounted to Kent Seavey the amusing story of how McComas became upset by Hassam when he insisted on turning his back upon a beautiful view of the coast to paint the scene from memory. Hassam’s painting method may account for the similarities between this Carmel view and his coastal scenes of Maine. Carmel was a favorite painting locale for artists, but Hassam may have found it especially attractive because it reminded him of his beloved Appledore in New England. Northern California shares with Maine a rugged coastline, and Hassam seems to have approached both shores in similar terms. He focused on the weather-hewn boulders, constructing them with the same forceful, short, vertical and diagonal brushstrokes and rich, contrasting, dark and light hues that appear in his Maine paintings. Only the cypress, bent from the ceaseless pounding of the ocean winds, alludes to a western locale. When a group of Hassam’s California landscapes was exhibited in the winter of 1915-16, they were considered "striking" and generally praised for their "remarkable effects of filtered sunlight" (American Art News 14 [December 4, 1915]: 5). Point Lobos, Carmel, however, describes a brilliantly sunny day. [source]