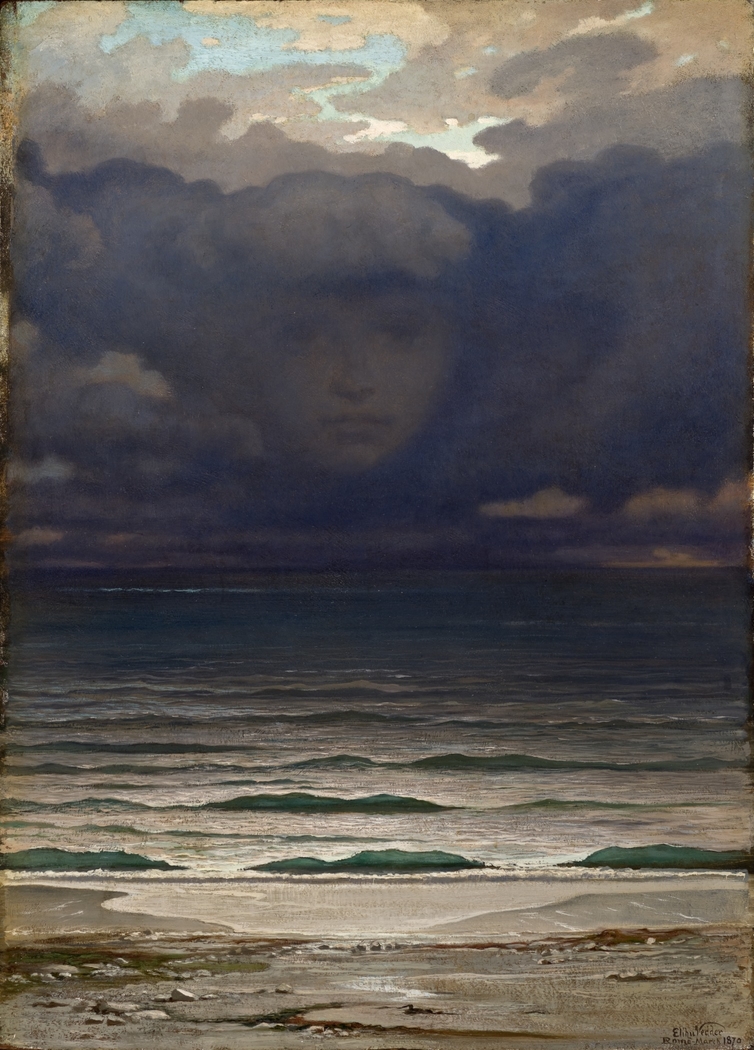 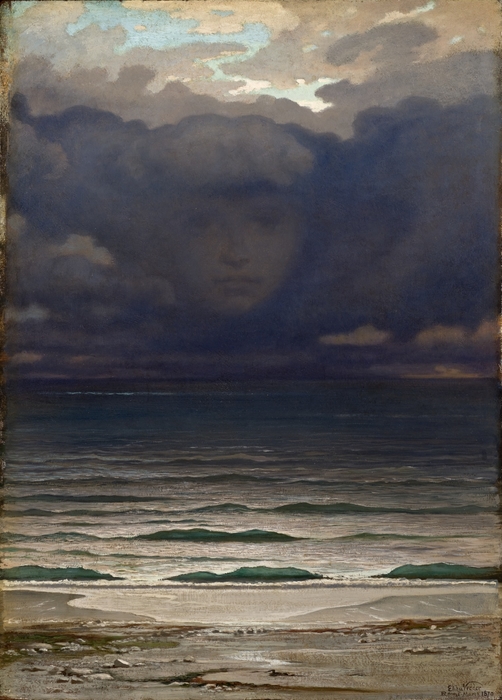 Memory is one of Vedder’s most symbolic paintings. Although it at first appears to be a straightforward nocturnal view of the beach and ocean, upon close scrutiny one sees a faint human face emerge in the cloudy sky. Similar images of a floating head appear in a group of Vedder’s drawings from the late 1860s. Later he would be fascinated by the related classical motif of the head of Medusa. The theme of floating and severed heads was popular with the English Pre-Raphaelites, and at the end of the century it became a characteristic motif of the symbolists. Artists used such imagery to suggest states of mind and ideas of a personal nature rather than to describe the material world.

The art historian Regina Soria has identified two of the artist’s drawings as bases for the museum’s painting: The Face in the Clouds, 1866 (Wunderlich & Co., New York, as of 1987), which was illustrated in Vedder’s autobiography The Digressions of V. (p. 287), and a small drawing done the next year with the title Memory inscribed on its original mat (LACMA, see illustration).

As the 1867 drawing was executed on March 19, the birthday of Carrie Rosekrans, Vedder’s fiancée at that time, it has been assumed that the head in the two drawings and the oil painting was that of Rosekrans. If the drawings were intended to be portraits of Rosekrans, they would have had to have been done from memory for she was not with Vedder at the times of their execution. Actually, it is difficult to ascertain either the sex or the age of the face in any of the three.

The head may be that of a child. When Vedder painted Memory, Rosekrans was pregnant with their first child, and some seven years later he was commissioned by a Mr. and Mrs. J. R. Dumaresq to make a similar painting using the face of their recently deceased son. Will South has noted that at least one contemporary of Vedder’s, English critic William Davies, referred to the head in the drawing Memory with the neuter "it" (Art Pictorial and Industrial: An Illustrated Magazine 1 [September 1870]: 49).

In none of Vedder’s own writings does he suggest a particular person or type as the model for the floating head. Perhaps the ambiguity of the sex and age of the head was intentional, for such imagery accords well with the artist’s lifelong fascination with imaginative subjects and his enthusiasm for a sense of mystery.

According to the artist’s annotation of the 1866 drawing The Face in the Clouds, he was inspired to create such a meditative image by Alfred Lord Tennyson’s poem, "Break, Break, Break" (published 1842), in which the poet contemplates the sea and broods over the memory of lost ones. In Vedder’s painting the insubstantial, miragelike face, in contrast to the sharp reality of the shore and waves, suggests the transitory nature of life and the dreamlike quality of memory. In its quiet, mysterious mood the painting is quite evocative. The mauve palette and spectral quality of the night lighting also place Memory within the formal and conceptual tenets of late nineteenth-century symbolism. In fact, Memory ranks as one of the earliest symbolist images by an American. [source]